Book Review: The Legacy of Daddy


Hi, folks. It’s time for another book review, and this time I’m stepping outside my genre to review some science fiction. I’ve been a sci-fi fan since I was a little kid, and elements of it creep into my paranormal fantasies. (Clifford Crane is a genetically engineered werewolf, in case you hadn’t figured it out, yet.) So, when I saw Angus H. Day’s The Legacy of Daddy reviewed on another blogger’s site, I couldn’t help myself. I had to check it out.


The Legacy of Daddy is the first of the Next You novels, of which there are currently five. Mr. Day has cleverly created a future dystopia in which an over-crowded Earth and the planets it has begun to colonize are at the mercy of a multi-national-planet corporation called Next You, which has effectively gained a monopoly on nanotechnology and its interface with newly discovered and more advanced alien technologies.


The Legacy of Daddy is a delightful story, and the writing of Mr. Day is fast and furious. Let’s take a look. 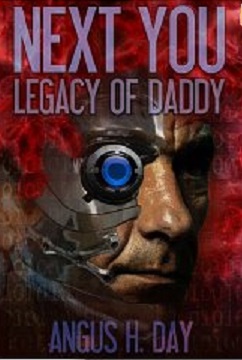 
From Amazon:
What happens when a Graduate student competes for a PhD in a dystopian society by experimenting with dangerous alien technology? Does humankind need technological help to leave Earth? These and other questions are awkwardly dealt with in The Legacy of Daddy.


From Me (since the above warrants elaboration):
Robert Focsile is a technologically competent and socially incompetent graduate student living in one of the domed city states that have sprung up on Earth following a devastating genocidal world war. Trying to earn his PhD, and thus raise himself to a higher level in the caste-driven society into which he’s been born, he experiments with an alien technology and suddenly finds his mind and body inhabited with nanites resurrected from an ancient alien being.
Guided, often against his will, by the alien presence within, he rises in the ranks to become CEO of the giant technology conglomerate, Next You. The world, nay, the universe, will never be the same.


I found myself conflicted in rating and writing a review of this book and probably wouldn’t have had I not announced ahead of time on my blog that I was doing it. This is a great story with a five-star premise, funny and sarcastic characters, and written in a compelling style at a manic pace. I was drawn into Mr. Day’s dystopian future completely from page one, eager to read more and more.


The protagonist and supporting cast are at least four-star characters. They aren’t particularly deep or well-developed, but they don’t need to be. This book is all story and pace, and none of the characters take themselves too seriously.


I’ll give the author an extra technical star, too. The Kindle version takes advantage of hyperlinks, so you can jump easily back and forth from the chapters to the table of contents. This is a nice touch, one I wish every author would employ.


But the book has some major flaws, all of which could be remedied by employing a bit of editing. Mr. Day shifts point of view and tense often, regularly in the same paragraph and sometimes in the same sentence. Punctuation is erroneous, inconsistent, or abandoned altogether. Sentences are run together without capitalization, periods, or commas to separate them. It is particularly distressing in scenes where characters are talking to themselves, communicating telepathically with others, and having out-loud conversations at the same time, scenes which otherwise could be delightful.


Thinking this was a condition that might have occurred in the kindle edition of Legacy of Daddy only, I peeked into the first chapters of several other Next You novels and found the same thing. There’s even a good example of what I’m talking about in the author’s bio on Amazon. It’s as if he refuses to go back and read over what he’s written, which is a shame since its otherwise pretty good.


So, if you’re looking for a great sci-fi story with lots of action and an occasional laugh, and you don’t mind the regular WTF moments where you have to re-read a paragraph or two to try and figure who’s saying, thinking, or experiencing what, and when, give The Legacy of Daddy a try. Unfortunately, for me, those moments were too often and, in the end, wore me out. By the last third of the book I was tired and eager to be finished with it, which is not a good sign.

Next You Interstellar
Utopian Estates
Destined For Something
Having Nice Things


See y’all next week. Until then, Happy Reading!
Oh, and if you're interested in some good paranormal fantasy, check out my books:

Angus H. Day dystopian Next You paranormal fantasy science fiction The Draculata Nest The Dragon of Doughton Park The Legacy of Daddy