I'm not just talking about feedback from the pack. It's feedback on the pack, as well.

You see, I was talking to Mr. Miyagi the other day. (That's what I call my marketing sensei - behind his back, of course. His real name is Adam.) He was describing our launch strategy for Half Human and the fact that we needed at least ten reviews before we start promotion campaigns. I said, "I can get that from my newsletter subscribers and my ARC team, easy."

He was skeptical, since he knows my list is relatively small. So, I started bragging about how great y'all are - how I go for quality, not quantity. I wasn't just blowing smoke. Y'all are pretty awesome, way better than the industry standard for email engagement. Most authors' emails have a 20% open rate, at best, but almost 60% of you guys at least look at the ones I send out. In fact, most of the time one or two of you reply with some comment or feedback I've asked for. I described you as "a burgeoning community." (Maybe that's going a bit far, but I liked the sound of it.) Each one of you is a gem, one of the Elite.

"Fine," said Mr. Miyagi, "we need a thousand more just like them."

"Whoa. What the...?" I was crestfallen. Mr. Miyagi had sucked the wind from my sails. How could there possibly be a thousand more like you? But..I told him I'd work on it.

So...if you guys know of anyone who might be interested in reading my books, getting these updates by email, getting a free book to review, stuff like that? Please ask them to log on to this blog and click the <subscribe> link to join the pack. (There. I worked on it.)

Now that's out of the way, here's what I'd really like some feedback on: my product description for Half Human. It's the thing that'll be on the back cover of the book and the description you'll see when you search for it on Amazon or click on an ad. It's supposed to grab your attention, pique your interest, and compel you to buy the thing (or, at least, look for more info). It's supposed to give you an idea of what to expect from the book and some confidence that you'll get it. Here's what I have, so far:

Last time they met, she promised to kill him. Now their lives depend on each other. Will she have his back...or blow a hole in it?

An outer arm of the Milky Way. Legendary shifter Clifford Crane reluctantly accepts an offer of employment from an unexpected benefactor, a being from his past he hoped never to meet again. Clifford knows it's a setup, and his fears are confirmed when he comes face to face with another new hire, Heather Felton. She's a deadly female alpha...who promised to kill him if he ever re-entered her life.

They've both been tricked into joining Half Human Enterprises and the crew of the SS Huey, an eclectic mix of scientists, technicians, and forgotten heroes. The crew's vision is to take down the powerful paramilitary corporation that controls commerce throughout human space. It's an ambitious undertaking, one that doesn't seem humanly possible. But don't bet against them. They're only half human.

The Huey's captain and CEO has chosen Clifford and Heather for an undercover mission. If the two shifters can pull it off, they'll stop an evil oligarch from supplying THE Corporation with an army of cyborgs. But the clock is ticking...on the time they can stay alive before their cover is blown...and how long they can work together before killing each other.

So, does it pique your interest? Does it give you an idea of what to expect from the book? Would you want to look inside and read the first few paragraphs? Leave a comment below and let me know!

Remember This Month's Giveaway: In my October newsletter (previous blog post) I presented my new web banner and offered an Amazon gift card to anyone who could identify all the characters, in order from left to right. So far, no one has gotten them all correct. Folks seem to be struggling with one character, in particular. (No, it's not the dufus at the keyboard.) 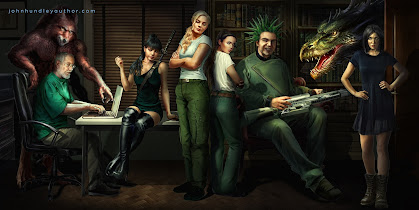 Hint: Check the last chapter of Rivers of Red. It's not too late to submit your guesses. Email me at jhundley50@gmail.com or redwolfjohn@johnhundleyauthor.com.

Okay, that's all for now. Looking forward to hearing from y'all soon. In the meantime, happy reading!

Posted by John Hundley at 12:45 PM No comments:

No, I'm not going all cowboy on y'all. It's the title of a chapter in Chris Fox's Write to Market. My online writer's book club read it last month, and the phrase seemed like a great subject line for this month's newsletter.

Because that's what I've been doing lately...branding with a hot iron.

I think I mentioned in the last post that Adam Houge's Fan Base Formula marketing group is guiding me through the launch of the first book in my upcoming Spaceship Huey Adventures series, Half Human. A lot of what we've been working on is my author brand.

Branding is a buzzword thrown around a lot in marketing circles. I don't pretend to understand all the ins-and-outs of it, but I think we're trying to work towards the goal of having my name being recognized as an author and associated with good books.

And that would be cool.

Two of the first "hot iron" tasks involved is setting up a new website and look-alike author page on Facebook that can be associated with ad campaigns. Want to see something really cool? Here's my new web page banner... 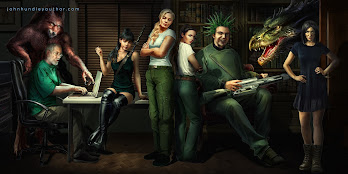 My brilliant cover artist, Ivan Zanchetta, put this together. Great job, don't you think? Soon you'll be able to see the final product on a new website and Facebook page. In the meantime, I want to celebrate by challenging all of you to identify the characters pictured above.

October Giveaway: This month's giveaway is for true fans only. I'm giving an Amazon gift card to everyone who can identify all the characters in my web banner. From left to right, there are eight of them, all characters from my books (except for the dufus at the keyboard). Contact me by email (redwolfjohn@johnhundleyauthor.com) with a name for each face. They must be in the correct order, left to right. If you get them all, you get a gift card. Since I don't have unlimited funds, I've set a budget for the total amount I can give away, and I'll divide it equally among all winners. If a lot of you get them all correct, the cards may not be worth much. But I have a gut feeling that one or two of you will win big.

September's Giveaway: Congratulations to Cari W, who won the printed boxed set of the Red Wolf Saga, plus a signed copy of The Cargo. Your books shipped out the first of this week. Enjoy, Cari!

Well, until next time...

Posted by John Hundley at 7:26 PM No comments: