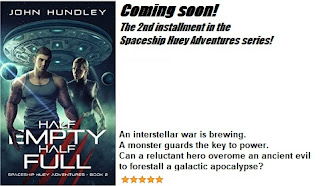 Imagine, if you can, humanity living in a world torn by poverty and war, where most of society’s wealth is controlled by giant corporations, where national governments are mired in political gridlock, and the heroes young girls drool over are vampires portrayed by sexy twenty-something hunks in the media.
It’s taken nearly twelve thousand years, but the creatures of the night originally created by the Fae to destroy the human race are mere generations away from achieving that goal. Vampires and the humans they have in their thrall secretly control most of the major corporations and national governments in the world. The time is soon coming when they will reveal themselves. When it does, humanity is doomed.


Perhaps it is already too late; but the Lycan, werewolves created by a rebel faction of the Fae in an effort to counter the Undead, live with the hope of a prophecy once issued by a powerful dragon: that one day a red wolf will rise from among their ranks to lead them to victory over the vampires and save mankind.

Book I
----------------------------The Draculata Nest----------------------------
For most guys, discovering their new love was a werewolf and wanted to turn them into one would raise a red flag. But for Clifford Crane, it was just one more time he’d tried to change for a woman. And Claire promised him renewed youth and supernatural powers. She loved him. They were happy together. She didn’t tell him she was about to die.
So they never talked about little things like where all the other werewolves were and what she meant with those vague references to his “destiny.”
Oh, well. He can’t dwell on the past; it’s time to move on. And, right now, he’s got other problems.
There’s an unstable beast inside him that’s grieving the loss of its mate. He’s having strange urges at night to stalk the coeds at a local community college. Powerful beings see him as a means to their nefarious ends.
Clifford’s about to find out love wasn’t the only reason Claire wanted him to Change. 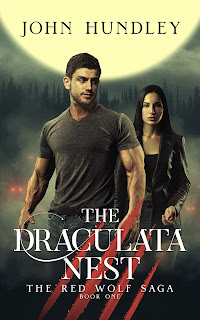 Click on the link to order:
ebook for Kindle      in Paperback

Life and love with Claire, the werewolf, was great. Then she died, leaving Clifford Crane and the dangerous beast he carries inside alone and grieving. His efforts to move on haven’t gone well.
His friends have a tendency to die horribly, and the last girl he hooked up with got turned into a vampire. So, now all he wants is to lay low and live a normal life…whatever that is.
But now that he’s on the supernatural radar, normal is harder than ever. The local pack believes he’s the one prophesied to lead them in a war against vampires to save mankind. They’ve even chosen him a mate, Heather, the smoking hot sister of the pack alpha.
Tempting? Sure. But, prophecy? Really? Clifford wants no part of it. Yet, the mysterious and powerful Fae known as The Dragon, who issued the prophecy centuries ago, is determined to see it come true, no matter who has to die. 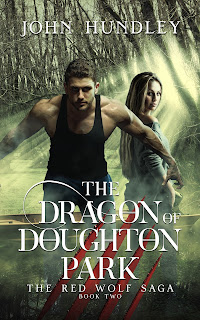 Click on the link to order:
ebook for Kindle         in Paperback


Book III
--------------------- Red Wolf Rising ---------------------
It’s always tough when a relationship ends, especially if you’ve made changes to be with the one you love. And Clifford Crane made some big changes. He let Claire turn him into a werewolf. But he’s not holding it against her. It’s not like she knew she was about to die and leave him all alone.
Or, did she?
Anyway, now that he’s accepted the pack she left behind and their belief that he’s the one prophesied to lead them to war against vampires to save mankind, things are looking up. He has a beautiful new girlfriend, the support of loyal friends, and a real purpose in life. Yes, his star is definitely on the rise.
But is he really cut out to lead an army of werewolves? Already the stress is inducing hallucinations of his dead lover. Or, maybe Claire is returning from the grave. Who knows? Considering spies, assassins, and a vengeance-seeking ex all have him in their sights, he probably won’t live long enough to find out. 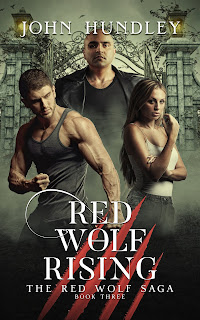 Reluctant werewolf, Clifford Crane, died and came back to life. Now, even his assassin is convinced he’s the one to lead the gathering army of Lycan intent on waging war to save humanity from the rising vampire scourge.
Although the Undead are amassing an army that outnumbers his a thousand-to-one, and his mortal friends and family are in constant danger, there is hope in the form of a familiar soul who’s returned with him from the Other Side. She says she’s come to help, but having an ex-lover living inside your head is a very mixed blessing. 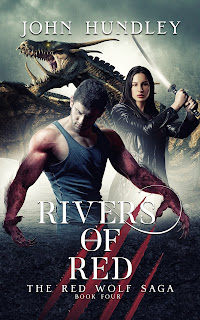 The Red Wolf Saga Boxed Set
Binge-read the complete saga in this special boxed set. At nearly ten years of publications and over 1500 printed pages, it will keep you up late into the night...and at a fraction of the cost of the individual books together. 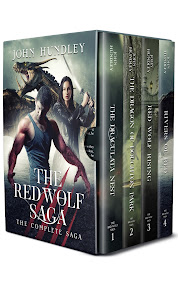 THE, the para-military corporation that sprung from the military industrial complex of Old Earth, is the real power throughout the regions of the galaxy colonized during the Great Migration. They have the money, the manpower, and the firepower to control commerce and supply lines among the human colonies. Everyone is safe and secure as long as they are human and don’t interfere with THE Corporation’s bottom line.

The crew of the SS Huey, an eclectic mix of scientists, technicians and forgotten heroes, aims to change all that. Their mission may not seem humanly possible. That’s okay. They're only half human.

-------The Cargo------
Prequel Novella for the Spaceship Huey Adventures Series
A forgotten hero, desperate for work. A lost love reincarnated in a shapeshifting alien. What could possibly go wrong?
Centuries old werewolf, Clifford Crane, has a love-hate relationship with both his own reputation, which has followed him light years from Old Earth, and the ghost of his ex-lover, who has taken up permanent residence in his mind. The reputation, at least, has finally shown its usefulness by landing him a job.
Although he dislikes, in principle, the para-military corporation controlling shipping lanes in human occupied space, they've offered him big bucks to handle security for a shipment of Silkies, an enigmatic race of shapeshifters who indenture themselves to the richest and highest bidders in the galaxy.
The gig is simple. Keep them fed. Keep them safe. Keep personal contact to a minimum. The work is easy, and the crew is amiable. Plus, there's enough money in it to get him back on his feet. But when he begins to encounter things that should not be there, things long forgotten from his distant past, he learns there is more to the cargo than meets the eye. 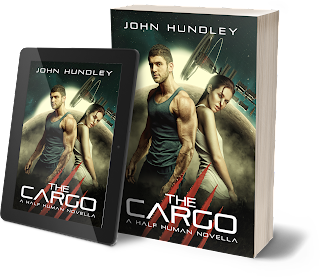 The Spaceship Huey Adventures - Book One

Last time they met, she promised to kill him. Now their lives depend on each other. What could possibly go wrong?

Out of work shifter Clifford Crane was finally getting things back together when he ran afoul of the most powerful oligarch on the planet Corsair. It nearly cost him his life. Rescued by a creature from his past he hoped never to see again, he owes a debt to a dragon, one of the most dangerous species in the galaxy.

Payback is joining Half Human Enterprises, an eclectic mix of scientists, technicians, and forgotten heroes who want to take down the paramilitary corporation controlling commerce in the human colonies. It's an ambitious undertaking. Not humanly possible. No problem for this group, though. They're only half human.

HHE wants Crane for an undercover mission to expose the very oligarch who is seeking revenge. They have the best cosmetic surgeons to construct his disguise and a dangerous experimental technique to suppress his immune system so he can't shift out of it. With luck, he'll survive. He's hopeful ...

... until he meets his partner, Heather Felton. She's a deadly female alpha who once promised to kill him if ever they met again. She's in charge of the mission, and she has no problem with putting his life on the line. 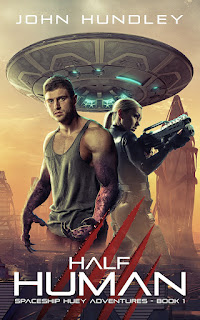 From September 3, 2021 I spend way more time than I should playing a game on my phone. Trivia Crack  is aptly named because it is hugely addictive. I've been playing for about five years now, during which time I probably could have written two extra books if I'd just put down the phone for an hour during the day. Oh, well. One of the popular types of questions you get in the games is the names applied for certain groups. Some of my favorites are, a murder of crows, a tower of giraffes, a flamboyance of flamingos, and a bloat of hippos. Crazy, huh? You can't make this stuff up. Wait, sure you can. Somebody does, right? I've always wondered who the people were that came up with those names, because I have one I'd like to throw out there, but I don't know how to go about it. You know those groups of smokers that hang out in the designated areas you somehow always have to walk through to get where you're going? I want to call them, clots. It fits. But I don'
Read more

Howdy, Readers. It's been a while. The finale of the Red Wolf Saga, Rivers of Red, is currently out to beta readers, and I have re-activated my blog in order to provide information leading up to its publication. I'm going to start by offering an excerpt from Part One.    Remember Luke Saunders, the private investigator hired by the vampire Roland Trudeau to spy on Clifford Crane and his Uwharrie pack of werewolves? In the last novel, Red Wolf Rising, Luke had finally had enough of Trudeau's  evil machinations, betraying him by going to Clifford to reveal his employer's plans to lay a trap for the wolves.    Knowing Trudeau would not take the betrayal lightly, Clifford offered Saunders protection, but Luke declined, choosing instead to take his chances on his own. Using skills obtained through decades of PI work, he attempted to hide from the vampire by dropping off the grid.    Let's see how that's going for him, now. Monday, June 27, 2011 7:15 pm Luk
Read more