March 09, 2015
Just for grins, I looked through the C:\Writings directory on my laptop and checked the creation dates for some of my project folders. On September 20, 2012, at 10:16 pm, I moved some notes, a brief outline, and a copy of the last scene in Dragon of Doughton Park (it became the Prologue for the sequel) into a folder called, “Red Wolf Rising.” At the time, I remember thinking I’d knock out the final book of the Red Wolf Trilogy in about nine months, getting it into catalogs and on shelves well before Christmas, 2013.
Did I underestimate that task, or what?
For those of you who read the first two books and waited all this time the see WTF was going to happen (Dragon ended with a bit of a cliffhanger), book three is finally here! 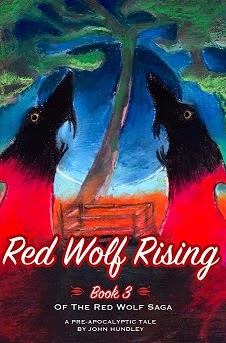 This past Friday, March 6, 2015, Red Wolf Rising became available in print and Kindle format on Amazon.
Purchase a Printed Copy
Purchase for Kindle

And over the weekend, I got it formatted for you Nook fans…
Purchase for Nook

The project took nearly two-and-a-half years to complete. And technically, it’s not complete even yet. Sometime during the first re-write I decided to split the book in two. The “trilogy” became a four-book “saga.” Therefore, you’ll see one more novel addressing this episode in the life of Clifford Crane, the Red Wolf of Prophecy. (You can check out the My Books tab for information on the two previous books.) Rivers of Red will complete the Pre-apocalyptic tale.
Yeah, I figure I’ll knock it out in about nine months, and it’ll be available to read in Spring, 2016. I’ll… huh? What’s that you say?
What do you mean, “idle promises?” When have I ever let you down?
Oh, yeah, that.
Well…uh…anyway…
…happy reading!