How Do You Define Success?

A little over three decades ago, when I was trying to kick a serious drug habit, my support group encouraged me to regard every day I made it through without using drugs a successful day.

It was good advice. Especially since so much of my life at the time was crashing and burning around me, I needed something to hold onto that indicated a positive direction. But as the one-day-at-a-times accumulated into months and years, I needed to raise the bar on the definition of success. I wanted to succeed in my career, build a good marriage, raise a kid who didn't turn into a serial killer, stuff like that.

Some of those things turned out successfully ... some, not. (I'm happy to say, there's not a single body part stored in my son's freezer - that I know of.) But, through it all, it was a good idea not to lose sight of that original success definition - each day without using drugs.

Okay, I won't elaborate further on that. If you're a recovering drug addict, you know what I'm talking about. If not, let me give another example.

When I decided to reawaken a lifelong dream of becoming an author, I knew the first thing I had to do was write a book. When I finished one and published it, I called it a success. And I think anyone who's ever tried to write a first novel would agree. But after I finished a series and decided to write full time, I raised the bar on my definition of success. Wisely (I think), I didn't raise it too high. I just wanted to be able to afford to keep writing. So far, the bills are paid (mostly), and I'm not starving.

Now I'm raising the bar a bit higher. I'm doing a real book launch, with a marketing campaign, promotions, the whole nine yards. I'm not sure what success might look like. Mr. Miyagi talks about best seller lists and movie deals. Me? I'm hoping to cover my costs. Whatever happens, I don't want to lose sight of the fact that I finished the book, published it ... and it's a good one.

This Month's Feedback Question: What's something you've been successful at? How did you determine it was a success? Got anything in the works? Leave a comment below.

Wahoo Moment: It's here! The ebook launch date is set for January 27, 2022. You can order it now on Amazon. 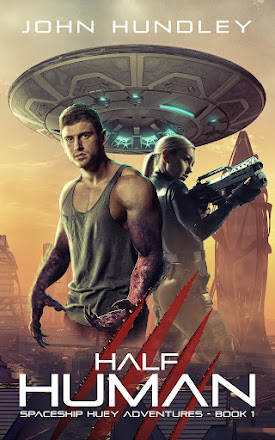 This Month's Giveaway: This month I ran a giveaway of a signed paperback copy of Half Human to the first three responders to my newsletter. At the time of this blog post, all copies are claimed. Unfortunately, I distributed the newsletter by time zone, which gave those on the East Coast of the US (and Pakistan) an unfair advantage. So I'll run the giveaway again next month. If you want to sign up for the newsletter, click here: <Newsletter Sign-Up>