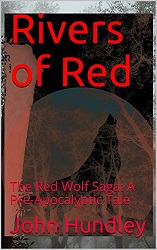 After five long years, the finale to the Red Wolf Saga!
---
Most guys are willing to make a few lifestyle changes when the right girl comes along, but Clifford Crane may have crossed the line when he let Claire Deerfoot turn him into a werewolf. But they were happy, until she died suddenly, leaving him alone and carrying some very big secrets to her grave.
When Clifford stumbles upon the local werewolf pack in a nearby national forest, he’s surprised to learn the unusual hue of his fur links him to an ancient prophecy. The prophecy promises a red wolf will one day appear to lead the Lycan to victory over the growing vampire scourge, thus saving mankind and fulfilling the wolves’ destiny.
Full of hope, his new comrades welcome him into their pack, and the pack bond awakens in Clifford unknown powers, confirming to many that he is, indeed, the one foretold. News of the Red Wolf of Prophecy spreads far and wide. Clifford even starts to belief some of the hype, himself.
Barely used to the prospect of a thousand-year lifespan and the supernatural immune system which keeps his human form youthful and nearly impervious to injury or disease, he’s suddenly the object of adoration from a swelling army of followers who are willing and eager to die for him. Prominent among them is the pack alpha’s gorgeous sister, Heather, who makes it clear from the start she’s available. Heady stuff.
But there are plenty of folks willing to kick his pedestal out from under him. Danielle, a jealous ex-girlfriend-turned-vampire, has sworn to kill both Clifford and Heather. The Chinese red wolf, Wei Shen, with his own claim to the prophecy, travels from his homeland to assassinate the upstart Crane. Worst of all, there’s the cunning vampire, Roland Trudeau, to whom all the players in this drama are but pawns in his Machiavellian scheme to rule the vampire world.
Clifford wrestles with his inner demons as well. And, when things come to a head as Wei Shen first kills him, then brings him back to life, one of those demons returns with him from the Other Side. Claire Deerfoot, once the love of his life, claims she’s here to help, but she’s not the same.