From the Back of Old Paint


Hi, folks. Last week I blogged about my search for a new coffee shop, my preferred writing venue. My quest isn’t over, and whether you’re interested or not I will let you know how it ends. But today’s blog is a travelogue of sorts. I want to take you along on one of my favorite bike rides around Charlotte, and (whoopee)… I have pictures!


If you fly into Charlotte, it looks like a small cluster of skyscrapers bursting out of the forest. There’s a reason for that. Those of us who pound the pavement or drive the traffic-clogged streets day in and day out forget how much green there is around here. And this time of year (early May), it is simply gorgeous. So, with a Friday off and the weather forecast rainless and warm, I decided to take my camera phone and cycle over to my favorite greenway near Pineville.

The Four Mile Creek and McMullen Creek greenways are connected to form a nearly six-mile escape from reality between Rea Road and Pineville. Getting there by bicycle is a little hazardous, but the trip is worth it. I try to make it at least three or four times during the spring and summer season.
The first thing to do is saddle up Old Paint. Old Paint is a green Diamond Back Response, a low-end hard tail mountain bike who’s been with me a little over five years. He’s in need of a tune up if I were to take him on any serious trails, but he’ll have no trouble with the streets and greenways of the Queen City today. We’re packing three frozen bottles of water, sunscreen, a towel, and extra t-shirt (which will be essential later in the summer), some trail mix, and my Kindle. 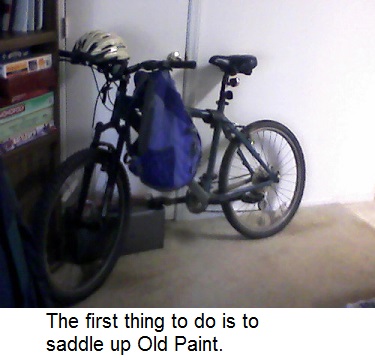 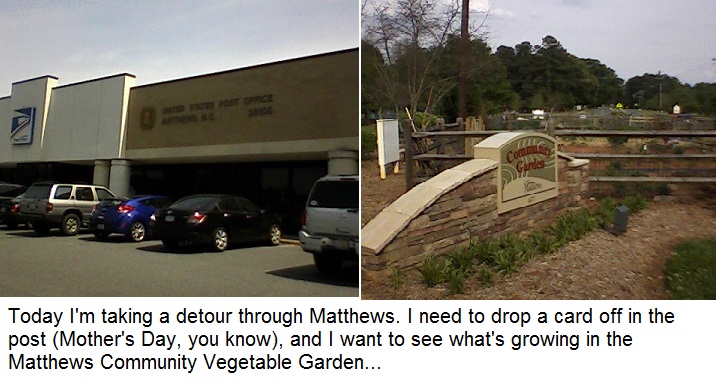 My normal route is out Monroe Road, then Highway 51 to Rea Road, where the greenway starts near Piper Glen. But today I need to detour through the little town of Matthews to stop by the post office to send off a Mother’s Day card. So I’ll head out of Mathews on Trade Street and cut over to Hwy 51 via Fullwood Lane. I also want to detour by the Mathews Community Garden, a little patch of vegetables right along the highway, to see what they’re planting this year.
Charlotte is not a bike-friendly town. Sidewalks for pedestrians are an afterthought along some streets. It’s pedal-to-the-metal from traffic light to traffic light, and cyclists beware. Luckily, Highway 51 runs through a side of town with golf courses and affluent neighborhoods, so there’s a sidewalk I can ride on to minimize the risks. But, I’m not there yet, and I’m reminded of the danger as I cycle out of Matthews on South Trade where the road narrows and traffic picks up speed. 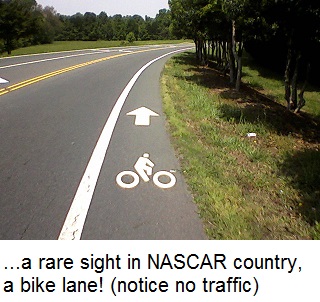 But as I turn onto Fullwood, I see a rare sight here in NASCAR country, a bike lane! Ironically, there’s not much traffic along this section of road, and the bike lane runs out as soon as the traffic picks up again. Another tribute to the oxymoron that is Charlotte city planning.
Once I reach Hwy 51, I hit the sidewalk and breathe more easily. I can relax and enjoy the sights along the way. I see realtors setting up for an office BBQ, golfers teeing off at Raintree Country Club, and a group of guys playing touch football on the expansive campus of one of the huge churches along the way. The only major danger point from here to the greenway is the Arboretum Shopping Center at the crossroads of Hwy 51 and Providence Road. All the drivers here are on their cell phones, all of them. 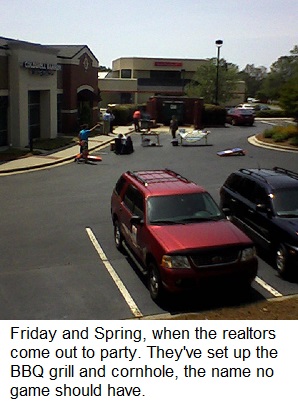 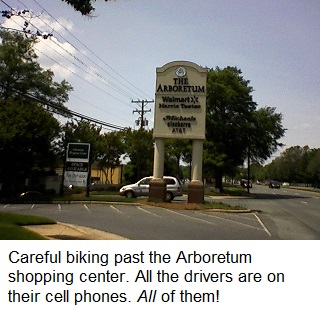 After riding for about an hour-and-a-half, I arrive safely at the Four Mile Creek Greenway. I stop for a coffee and Kindle break at the Starbucks conveniently located across the street from the end of the greenway. The sun is high in the early afternoon and I sit, sip, and read at one of the tables outside. There is a soft breeze blowing. Life is good. 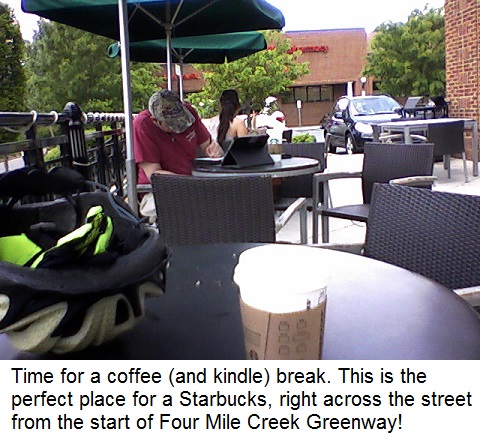 The next few hours are blissful. There is plenty of activity on the greenway – joggers, walkers, young moms pushing strollers, cyclists – but not the heavy traffic one finds on Saturdays and Sundays. The air is filled with puffy little parachute seedlings blowing from some type of tree that I can’t identify, and in some places it’s almost like it’s snowing, and the pathway looks lined with fluffy cotton. There’s lots of flora and fauna, and I take as many pictures as I can, wishing for the umpteenth time I had a better camera.

Eventually I reach the end of the line, and I sit and munch on some trail mix, drink some of the ice-cold water in my cache, and read at a picnic table near the McMullen Creek access parking lot. Before climbing back on Old Paint for the return trip, I have a brief, panicky thought. I have squandered a day off where I could have been writing!
I haven’t. My spirit has been renewed from having been outside all day, and fresh ideas have been bouncing around in my brain as I pedaled along. I know eventually they’ll make their way to the page… in their own time. 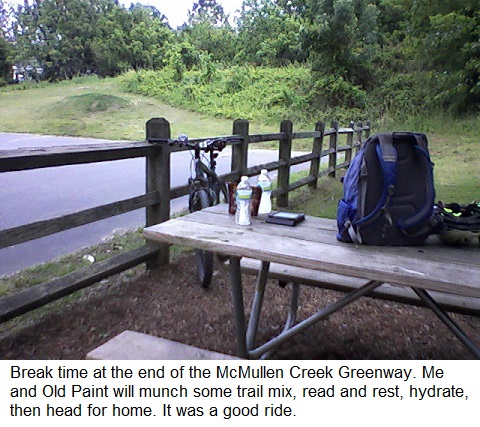 Well, I hope you didn’t mind this little break from talking about the Red Wolf novels like I usually do. I promise more of Clifford Crane and the gang in the near future.
Until then… Happy Reading!

Of course I do need to include the usual, shameless promotion of my books. Four and five-star reviews are piling up for both of them. eBooks are only $2.99, and you can purchase one by clicking on one of the links below the cover image of your choice.