Hi, folks. It’s time for another book review, and this time it’s something really different.


My Kindle is filled with books right now. Probably ninety percent of it is paranormal fiction. That’s what I write, and that’s what I read. But every now and then I like to branch out, because diversity is important, right? So, sprinkled among the paranormal you’ll find the abnormal science fiction, mystery, thriller – even a biography, historical fiction, or travelogue. But I’ve never strayed so far from the beaten path as I have today.


First of all, I need to defend my manhood. Donna Joy Usher’s The Seven Steps to Closure comes with credentials. It was the winner of the 2012 elit Publishing Award in the humor category and a finalist in the Shirley You Jest! Book Award the same year. It’s also been reviewed favorably by bloggers I’ve come to trust. So, when it went on sale a while back on Amazon for 99 cents, I decided to take the plunge and get in touch with my feminine side.
So, here goes… 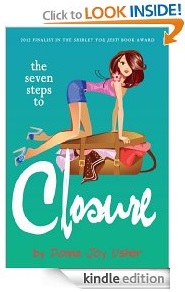 
Book Description
Tara Babcock awakes the morning after her 30th birthday with a hangover that could kill an elephant - and the knowledge she is still no closer to achieving closure on her marriage breakup. Things go from bad to worse when she discovers that, not only is her ex-husband engaged to her cousin - Tash, the woman he left her for - but that Jake is also running for Lord Mayor of Sydney.
Desperate to leave the destructive relationship behind and with nothing to lose, she decides- with encouragement from her three best friends - to follow the dubious advice from a magazine article, Closure in Seven Easy Steps.
The Seven Steps to Closure follows Tara on her sometimes disastrous- always hilarious - path to achieve the seemingly impossible.
A credible and amazingly touching debut novel from Donna Joy Usher, this is a solid, light-hearted and honest read with plenty of laughs.

Chick Lit is not my usual genre, nor do I intend it to be in the future. I’ve had too many years ensconced in the male gender role. But I do enjoy a romantic comedy on DVD now and then and this is the sort of thing from whence those spring, so after running across several reviews of The Seven Steps to Closure and interviews with author Donna Joy Usher on blogs I follow, I decided to give it a try. I’m glad I did.


The story is formulaic, but it’s a good formula, tried and true, and really, you wouldn’t want it any other way. The heroine, Tara, is likeable and suffering from low self-esteem following her divorce from a thoroughly despicable ex. Her group of equally-likeable, quirky BFF’s persuades her to follow the steps to closure outlined in a women’s magazine article and she agrees out of sheer desperation. The process places Tara in a series of comical situations and of course leads to romance in the end.


The book is filled with all the characters and situations you’d expect. I’ve already mentioned the likeable heroine, despicable ex, and the quirky BFF’s. There are also impossibly-bad blind dates, gay hair-dressers, friends coming out of the closet, adorable neurotic pets, hunky love interests, romantic misunderstandings and reconciliations. Most importantly, the story ends with all sorts of warm, fuzzy feelings and hopes for the future. (This is not a spoiler, is it? I mean, I’m not giving anything away, right?)


I enjoyed Usher’s writing. The story was well-paced, and there was a good balance between the action and the internal musings of the main character. It was one of those books where it was hard to find a convenient place to put it down. Usher displays a good sense of humor, too. I rated it four stars, and the only reason I didn’t rate it a bit higher (like, four-and-a-half?) is that so much of the action involves shopping, my own personal hell. Yeah, that’s prejudicial, but it is what it is. I’d recommend it to most women I know. If you’re a guy, well, do what I did. Buy the ebook so nobody can see the cover while you’re reading it.

So that’s it. I stepped out on the limb. It’s a little wobbly, but it didn’t break. Now I’m going to real quick go write a graphically violent scene in Red Wolf Rising, watch some ice hockey on TV, or maybe a Clint Eastwood movie marathon, so I can recover whatever machismo I have left.

And, as always, if you’re looking for a great read – and cheap – click on one of the links below to order one of my books at only $2.99!


Until then… happy reading!