It's Hard to Do Nothing


Hi, folks. Well, my blog post is a little late this week due to the fact that I’ve been studying for, finally taking, and passing, my ADC exam. Whew! I’m glad it’s out of the way and I can return to my writing. I forced myself not to write for almost two weeks, and I can’t wait to get back!
The final edits on the beta version of The Dragon of Doughton Park should be completed this week and sent out to beta readers. Thanks so much to my editing team! I really couldn’t have done it without you. And the cover art for both Dragon and a re-design of The Draculata Nest should also be ready soon. I’m lucky to have the talented artist, Ray DeLotell, working on that. He’s been sending me cover concepts regularly for the past few weeks, and I’m going to tease y’all with a few of them in the next several blogs. Check this one out, reworking the original theme for the cover of DN… 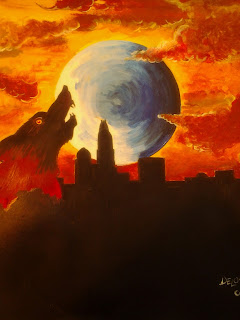 Now, I was planning to elaborate more on the young women/old wolves theme from last week’s blog, but I have something I need to share instead.


Do you have a minute? Great.


I’ve been under some stress lately. Oh, not real stress. Ninety-five percent of the rest of the world would look at my life and say it was pretty cushy. I mean, I don’t want for food, shelter, safety – that sort of thing. I have friends and family, and I’m in remarkably good health considering my age and the sins of my youth. But, everything’s relative, right? Here’s the deal…


I’ve never regarded myself as a type-A kind of guy, the kind who has to be juggling fifteen different activities at the same time and excelling in all of them. Ask either of my ex-wives who spent a great deal of time and energy trying to get my ass off the couch and do something – I can kick back and relax with the best of them. Or, at least, I used to.


But when I lost my job in 2009 and decided to make a late-life career change, I dove into it head first, stroking and kicking all-out. I’ve worked pretty hard since then to complete two-and-a-half years of additional college work, including a nine-month internship, while maintaining a 4.0 GPA and writing the larger part of two novels. (Hey, that sounds pretty impressive when I say it like that, doesn’t it? Whatever. The point is…)


I had one final academic hurdle to clear this past weekend before returning to the nine-to-five world, my ADC certification test. I’d been putting it off, using the excuse that I wanted to get this second novel ready for publication first, but that excuse began to not work anymore as the editing and cover design process dragged on. I finally bit the bullet, scheduled the test, started preparing for it and facing the nagging fears of the consequences of failure.


Saturday morning I took the test. Like most things I worry about ahead of time, it wasn’t so bad. I actually did pretty well on it, and when it was over I decided to reward myself with some “down time.” I decided the rest of the weekend I would do absolutely nothing.


Now, when I go back to work on Monday and everyone asks me what I did, I’ll automatically answer, “nothing,” but I will be lying. And part of the reason will be that I’m ashamed to admit I tried and failed.


I mean, my effort lasted all of three minutes! As soon as I got on the bus after leaving the testing center, the pull of alleged obligations hit me. Fine. I made the obligatory phone calls and texts to friends and loved ones, letting them know I’d passed the test. There, that was done. Time for nothing. In no time, my kindle was out of my pack and into my hand and I was reading (Stephen King’s 11/22/63). Wait, that’s not nothing. I’ll do nothing when I get home.


At home, the laptop was suddenly out and I was on Facebook. Well, after all, I should let the world know I was doing nothing, right? After that, I’d really do nothing. No, after I caught up on my emails… and went for a bike ride… and played my guitar… and finished watching the better part of the third season of Chuck. I went to bed around 11:30 vowing to do nothing on Sunday.


Well, I lay in bed this Sunday morning and actually did nothing for about ten minutes, so maybe I’m not a complete failure, but most of that ten minutes was spent in contemplating all the things I could be doing if I wasn’t doing nothing. So, I gave up, got up, and did something. Lots of somethings, really. And eventually, I did what many of us do when we can’t do something… or nothing… I blogged about it!


Well, that’s all for now. As a reminder, this is the last chance to volunteer as a beta reader for The Dragon of Doughton Park. Just leave a comment or email me at jhundley50@gmail.com.


As usual, if you want to learn more about The Draculata Nest so you can keep up with the blog or get ready for the sequel, click on one of the links below.


Until then… happy reading!