First of all, let me wish everyone a happy 4th of July.

Next, congratulations to the winner of our June giveaway, Debi Z. Debi will soon be receiving a complete boxed set of Richelle Mead’s Georgina Kincaid series. Debi, I hope you enjoy Georgina half as much as I have.

Finally, the big news for July:

On June 15, Amazon announced that its Kindle Vella program is set to launch in mid-to-late July. That’s this month!

If you haven’t heard, Kindle Vella allows people to read episodic stories on the Kindle iOS app and Amazon.com without having to purchase or “borrow” an entire book. Readers can get the first three episodes of a story for free, then use pre-paid ‘tokens’ to buy more episodes if they like what they’ve read. Episodes are 600 - 5,000 words in length and are priced based on word count.

Authors can leave notes about each episode and readers can leave comments about what they’ve read. As an author, I’m pretty excited about that aspect. I love reader feedback.

And I’m hoping to get some, because when Kindle Vella launches, so does Song of Sing! 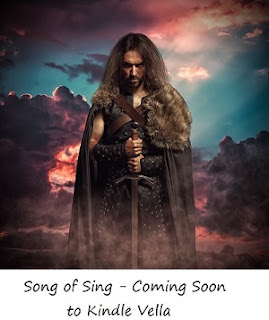 A mercenary with a forgotten birthright. A witch who walks in dreams. If they survive, empires will fall.

They call him Sing, for the sound of his sword in battle. He earns a living by anything that can be done with a blade...and alone.

Erin is a green-eyed witch from the winter lands. She works in a brothel, hiding her powers from those that would use them for their own gain.

Their destinies are entwined.

Some of you will recognize the story, since I expanded the Alchemist’s Ledger short story to get the first four episodes. (Some of you downloaded it when you signed up for the newsletter.) I’ve published a fifth episode already, and episode six should be available by the time Vella launches. I’m digging writing in this sword and sorcery genre. The tale that’s developing is epic in scope. I hope y’all like it.

We started talking about genres in last month’s newsletter. Do any of you guys read sword and sorcery? If so, give me a recommendation in a comment below!

Someone asked me the other day how the audiobook for The Cargo was coming along. I’m afraid the project is on hold until I finish the first draft of its sequel, Half Human. I only have a chapter-and-a-half to go, after which I’ll jump right back into recording on the audiobook project.

This month I’m giving away another Amazon Gift Card. And, please, don’t be shy. Honestly, there are only a handful of folks that are entering each month, right now. So, until my email list gets a lot bigger, the chances of winning are darn good. Click here to <enter the giveaway>.
If you'd like to subscribe to my email list to get these newsletters by email, click the following link. All new subscribers receive a free short story and chances to win free stuff in the months and years ahead. Just click <Subscribe>
Until next time, Happy Reading!