September 05, 2015
Okay, one more rant and I’ll drop the subject, I promise. But, really, don’t you just hate picking up a new book touted as first in a series, and you really, really like it, and then when you finish you find the next book has yet to be written?
I do.
I can’t stand it. Now, I’m hooked, and maybe there’s not even a clue when the next book will be available. Plus, the wait-read cycle could repeat itself over quite a few years. It takes time to write, edit and publish a book. Even the most prolific writers can’t fulfill the need I have for instant gratification once I’ve become a fan.
The series I’m most anxious about at the moment is a delightful dystopian/sci fi offering by my favorite paranormal author, Richelle Mead. 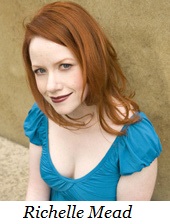 We all know Mead from her popular YA novels that sprung from Vampire Academy and its spinoff, Bloodlines. If you’re lucky, you’ve read her debut adult series featuring the reluctant succubus, Georgina Kincaid.

Mead has become a master at putting together a tight, six-novel series that features a feisty heroine you’re guaranteed to fall in love with, surrounded by a supporting cast of interesting friends, lovers, vampires, demons, etc. They’re fast-paced and written mostly in first person from the perspective of the single main character.

But, in the midst getting out the last few Bloodlines novels, Richelle snuck in a couple of gems, Gameboard of the Gods and The Immortal Crown, the first two in a series she’s named, the Age of X.
Age of X represents a definite departure from the norm for Mead. She’s abandoned the first person, single character POV for a third-person narrative, and the perspective flips back and forth among three main characters. Mae and Justin have all the depth and breadth you need in adult protagonists, and even the culture-shocked teen genius, Tessa, has enough baggage in her short past to balance the scales of the multiple plot lines. 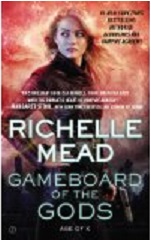 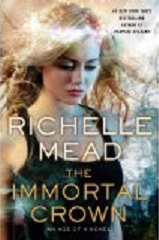 I love these books. I love the post-apocalyptic world Mead has created for the backdrop. I love the eclectic palette of dystopian societies she uses to color the stories. I love that she’s created a series that allows her to indulge her love of world religions and cultural mythologies, bringing in the gods themselves as characters.
What I don’t love is that, although it was only twelve months between publication of the first two books, it’s now been fifteen months since The Immortal Crown, and we haven’t a clue when The Eye of Andromeda will be out. I check Richelle’s website regularly, and the answer to that burning question has been for a while, and still remains, “Release Date TBA.”
Arrrgh! I want it now!
Life is so hard, isn't it?

Hey, if you want to get hooked on an unfinished series yourself, check out the My Books tab at the top of my blog. Happy reading!
Age of X Red Wolf Saga Richelle Mead