Excerpted from the September, 2022 Newsletter:

Wow! The last few weeks have flown by. It's already time for another Red Wolf Pack Newsletter. Hmmm ... let's see what's in the news.

Last month I published a revised version of my first novel, The Draculata Nest. I did it in response to a renewed interest in The Red Wolf Saga caused by readers of The Cargo and Half Human who wanted the back story of Clifford Crane. The original had been self-edited, and I felt I owed it to readers to have it professionally proofread. I'm glad I did. I think the updated version is better for it. I'm in the process of doing the same with The Dragon of Doughton Park and--eventually--the whole series.

Today I'm running a promotion--an official "re-launch" of the book--for only $0.99. It's a strategy to bump it up in the rankings and get some support for my ad campaigns--a marketing thing. 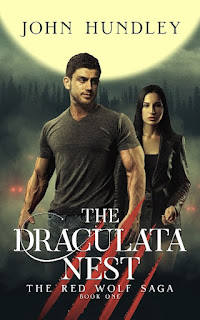 If you already read the book, don't buy it again. I switched a few things around and polished some scenes, but it's 99% the same as the original. However ... if you haven't read it, and you want to dive into the series to find how Clifford Crane became the legendary Red Wolf of Prophecy, click the link above.

And good news for readers of this blog: The promotion is over, but I'm keeping the price at $0.99 for the foreseeable future! The link is still good! Happy reading.