I'm continuously amazed with the trends and genres that have developed in speculative fiction over the years. recently I've become fascinated with a sub-genre I never knew existed--Gaslamp Fantasy.

Gaslamp Fantasy employs a Victorian or Edwardian setting (between mid-19th and early 20th centuries--think Sherlock Holmes) in a blend of fantasy and historical fiction. It's a lot like Steampunk with less of an emphasis on science and technology and more centered in magic and the occult. Examples in comics and films might be The League of Extraordinary Gentlemen  and Arcane, the Netflix adaptation of the League of Legends game.

Personally, I think I like this a little better than steampunk, and if you're interested in sampling the genre, I have a recommendation ...

P.H. Solomon's The Order of the Dark Rose caught my eye with its cool cover. I'm about half-way through reading it--it's a pleasure read, so I'm taking my time--and it's a blast. Check it out and let me know what you think. 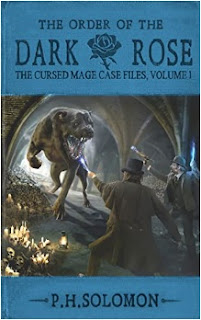 <Order of the Dark Rose on Amazon>