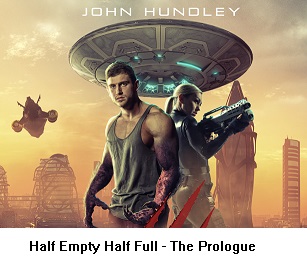 Hi, folks! I just sent the final draft of Half Empty Half Full, the second book in my Spaceship Huey Adventures series, to the proofreader for editing. Soon the brilliant Ivan Zanchetta will begin work on the art for the cover. I thought you guys might want to get a sneak peek at some of the story, so here's the Prologue! Let me know what you think

Bernie Cosner felt extremely confident. In fact, he was on top of the world.

He stood with his hands on his hips, nodding in satisfaction as the flood lights illuminated the scene below, replacing the fading rays of the sun. Two giant excavation vehicles, each of their sixteen tires easily three times his own height, gouged away at opposite ends of the strip mine. A fleet of smaller trucks hauled meronium-rich ore back and forth between the excavators and a line of field smelters, each of which had been grinding away non-stop since morning, extracting the precious metal from the ore and converting it into ingots the size of bricks.

Each of those ingots was worth enough credits to feed and clothe a typical family of five for a lifetime, plus send three kids to college, finance their first homes, and provide the best medical care for the next generation. And, as field manager for the mine, Bernie’s contract with THE Corporation afforded him a nice bonus for each ingot produced. He licked his lips. He was going to be rich.

This first day of the operation had gone so smoothly, he’d decided to add an extra shift and work through the night. THE was shuttling down a second crew around midnight, along with a more permanent structure to house the workers, replacing the cluster of tents erected near the field office behind him. It meant an eighteen-hour shift for the guys working now, but they could handle it, and he could work up an easier shift rotation once everything was in place.

He sighed in satisfaction. Time to report in. He turned away from the glorious view and entered the field office. Settling himself comfortably in front of the comm center, he beamed a call to a THE freighter in stationary orbit thirty-six thousand kilometers above.

“Henson here,” answered a voice. “How’s it going down there? Still want us to send that second crew?”

“Absolutely,” Bernie answered. “We’ve got a load of ingots for you to pick up, too. I swear, we made enough today to cover the cost of the entire operation for the next three months.”

There was a low whistle in response. “Well, they said it was a rich deposit. Makes you wonder why we didn’t do this sooner, even if this planet is as far out in the boonies as it could get.”

“I have a theory about that,” Bernie offered.

“Yeah. It’s the times, man. The Central Authority is starting to be a pain in the ass, and so are the pirates in the Cyprian Sector. The Corporation wants battle cruisers. We’re going to get enough meronium out of this mine to build an entire fleet.”

“Laugh, if you want, but mark my words. Wait ‘til you see the load I’ve got for you.”

Bernie thought about it. He felt like chatting. “Hold on,” he said. His comm chit was buzzing. He pulled the device from his pocket and noted the caller id. “Henson, my shift leader’s calling. I better take it. See you around midnight.”

“I’ll be there.” Henson terminated the call.

Bernie accepted the call on his chit. The face of his shift leader appeared on the screen. “What’s wrong, Joe? I don’t hear the happy sounds of mining in the background.”

“We have a situation, sir. One of the locals showed up from Logans Ford. He started ranting about how we can’t work up here at night, that there’s some monster roaming the hills, feasting on the blood of miners. He’s starting to scare some of the crew.”

“Jesus, Joe, what kind of wimps have you got working down there? Tell the guy to shut his trap and send him on his way.”

Joe winced. “Sir, this guy’s kind of a handful. He’s very adamant that …”

“Fine,” Bernie interrupted, in irritation. “I’ll take care of it. Be right there.” He ended the call and pushed himself from his chair. He stalked across the room and opened the door to a large storeroom. Hanging on the door was a shoulder harness into which was holstered both a large caliber pistol and a taser. He strapped on the harness, stalked to the front door, and flung it open.

He was brought up short by a blood-curdling scream.

The floodlit scene below him was chaos. Men were running in all directions from a cluster of partially dismembered bodies. A large dark shape moved among them, cutting them down in mid-stride. The thing moved so fast, it was a blur, until it paused for a split second to rip open the cab of one of the trucks and extract the driver, whose scream was cut off in the instant his head was hurled into the air.

Bernie’s eyes were like saucers. What in God’s name … His hand automatically wrapped itself around the pistol, but he didn’t withdraw it from the holster. Instead, he slammed the office door closed, fastened the deadbolt, and scrambled to the comm unit.

He pressed the call button and shouted into the microphone, “Henson! Henson! Answer me, dammit!”

The unit crackled in response. “Cosner? What’s the matter?”

“Get that shuttle down here asap!”

“Calm down, Cosner. What the hell?”

Something slammed into the office building, rocking it on its foundation. Bernie gripped the desk to keep from falling out of his chair. “For God’s sake, Henson, get me out of here, now!” He heard the door being ripped off its hinges behind him. Something snaked around his leg, gripped it tightly, and tore him from his chair.

Thirty-six thousand kilometers above, Henson frowned as the screams coming through his comm speaker suddenly stopped. “Cosner?” He tried again. “Cosner!” Nothing. He swiveled his chair to regard a man standing in the doorway, in THE full-dress uniform. “Sir?”

The man raised a coffee cup to his lips and took a sip. “I heard,” he nodded.

“Should I send the shuttle, sir?”

The man considered for a moment. He took another sip from his cup. “Let’s wait until morning,” he sighed. “Don’t bother sending the second shift of miners. I’ll take my own team down, pick up the meronium ingots, and gather information for a final report.”

“Yes, sir,” Henson acknowledged. He reached over and switched off the comm unit.