My genre, that is.

The month of September has been filled with marketing research, with a tiny bit of writing on the side. Since signing on with Adam Houge's marketing group, I've been diving deep into the space opera genre, looking for clues in how to position my upcoming shifter space opera series for launch in the first quarter of 2022.

Typing random words into Amazon's search engine with an incognito browser and crunching the numbers on the results may not sound like much fun to you. Believe me, it isn't! It's a lot like panning for gold, I guess. It's tedious and mind-numbingly boring...until you find that gold nugget.

And I found the gold nugget!

I am not the only one writing about werewolves in space. I'm delighted to have found two very successful series that have mashed up the urban fantasy and science fiction genres into some great reading.

If you liked The Cargo, I guarantee you'll like my upcoming release, Half Human.

You'll like the Kurtherian Gambit series by Michael Anderle. He's cranked out twenty-one of these babies since 2017. I've already devoured the first two. They're fast-paced, in-your-face, vampires vs aliens, fare that folks have been reading like crazy. Check out book one, <Death Becomes Her>, on Amazon. I bet you like it.

I bet you also enjoy the Shamans and Shifters Space Opera series by Jenny Schwartz. It's a sci fi romance between a gifted shaman who guides ships through dangerous wormholes and a werewolf bounty hunter. I'm currently absorbed in the last few chapters of <Her Robot Wolf>.

If you try out one of the above, you'll probably get hooked. And then, next year, when you're searching for the next Anderle or Schwartz book on Amazon, you'll run across this listing among theirs... 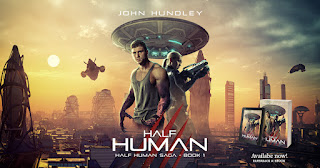 I'll be participating in some cross-promotions with other science fiction and fantasy authors, starting in October. I hope you guys will take advantage of the opportunity to download some cool books for free. More will be revealed.

Feedback from the Pack: You guys blessed me with some cool names for groups after the last newsletter. Some of the best were a little X-rated, so I can't share them here, but here's a few good ones...a plethora of pre-schoolers, a gaggle of gals, an obstinancy of buffalos, and a shrewdness of apes. Thanks, guys.

A quick Blink rant: (Sorry - I can't help it.) After months of waiting, Blackpink's Lisa finally dropped her first solo, Lalisa. I was slightly disappointed. Don't get me wrong. It's a catchy tune, guaranteed to stick in your head for weeks after hearing it. It's already hugely successful. It broke sales records just from pre-orders, and there were over 70 million views of the M/V in the first twenty-four hours. And I'd be happy just watching Lisa stand there for four minutes, doing nothing. I thought the song was a great celebration of her success, but it barely scratched the surface of her potential. That being said, I just watched this on YouTube for about the fiftieth time: <Watch Lalisa on YouTube>.

This Month's Giveaway: It's not too late to enter for a chance to win a printed boxed set of the Red Wolf Saga, plus a signed copy of The Cargo. Contest ends 9/30/21. Just click to <enter the giveaway>.

Until next time, Happy Reading!