Clifford Crane, the main character in my novels, tends to go off half-cocked. He doesn’t always think things through before he acts. Neither do I.

Which is fine for an action hero. It keeps things interesting. But for an author? Not so much.

Back in 2010, I had a story to tell. So, I started writing the Red Wolf Saga. When The Draculata Nest was finished and I went to publish it on Amazon, one of the first questions that cropped up was, what’s the genre?

(A lot of my answers begin like that. This time, however, it ended that way, too.)

I really hadn't given genre much thought. I just wanted to write something I'd enjoy reading myself. (Since it was likely I'd be the only one reading it, that seemed like a practical goal.) 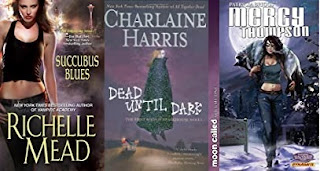 I asked Google, and the term Urban Fantasy popped up. Research done. That’s what I tagged my book as. I left it at that. It took me ten years to realize what a mistake that was.

Okay, that’s a lie. I need to give my poor old brain some credit. Truth is, I ignored the issue for ten years. Then when I became a self-designated “professional author” last year, and other authors told me it was a mistake, pointing out my pitiful sales figures as proof, it only took me a few months to accept that it was a mistake. There. That sounds better. Or, does it?

The term, Urban Fantasy, seems to have sprung up in the mid-1980’s to describe Terri Windlings’ Borderland stories. It really took hold in the mid-1990’s after Neil Gaiman’s Neverwhere novel and TV series. By the time the 21st century rolled around, the market was deluged with stuff described in the genre. Since then, the deluge has become a flood.

Wikipedia defines Urban Fantasy as "a narrative that uses supernatural elements in a 19th-century to 21st-century (or equivalent) urban society. It usually takes place in the present day (or the equivalent of the 'present day')." That covers a lot of ground.

For marketing purposes, I should have been more specific. Sure, my book fit in with Georgina Kincaid, Sookie Stackhouse and Mercy Thompson. It did not fit characters like Harry Potter or Percy Jackson, also part of the urban fantasy genre.

So, I agonized over the issue a bit and narrowed my Red Wolf Saga down to Paranormal Romance. After all, there's love (or, at least, sex) in it, right?

For something to be romance, it needs "a central love story and an emotionally satisfying and optimistic ending." Sorry, no happily-ever-after for Clifford Crane. Authors in the know have pointed out that, if I advertise my books as romance, I run the risk of angering readers who are expecting happy endings when they buy them.

And I want to entertain y'all, not piss you off. I changed the genre again. And then, again.

Right now, I have the Red Wolf Saga described on Amazon as a Paranormal Urban Fantasy Adventure. Since doing so it seems to be selling a little better, but I'm still not sure I have it right. Which brings me to...

What genres are your favorites? Do you think I've placed The Red Wolf Saga in the right one? I'd love to hear your thoughts in a comment below.

I’m pleased to announce I’m now writing the last four chapters of Half Human. My cover artist, Ivan, has done another fantastic job on the cover, which I will reveal in the next month or so.

Recording for the audiobook version of The Cargo is progressing slowly. I’ve had some technical issues, but I think those are resolved. Hopefully, I’ll have something for beta listeners before too long.

I decided to pursue development of an episodic adventure with the Sing character from The Alchemist’s Ledger for publication on Amazon’s new Kindle Vella platform. More to be revealed in the coming months.

First of all, congratulations to Gerrie H, who won the $25 Amazon Gift Card from last month’s giveaway. Hope you find something good to read, Gerrie!

While composing this newsletter, I was reminded how much I love Richelle Mead's Georgina Kincaid series (re: Succubus Blues in the panel above). It's far and away my all-time favorite urban fantasy series. If you haven't read it, I want you to. So, this month I'm giving away a boxed set of the 6-book series for Kindle. Now, if you don't read on Kindle, I'll negotiate with you on another platform, so don't let it keep you from entering the giveaway. I promise you'll love these books. To register, click here: <Register for the Giveaway>

If you would like to receive email updates, a free download of The Alchemist's Ledger short story, and future chances to win cool stuff, sign up for my newsletter here: <Join the Red Wolf Pack>.