I can’t believe it’s already time for another newsletter. Time flies when you’re having fun, right? I wonder about that saying, sometimes. I mean, it’s true, I suppose. But sometimes time just flies because…it’s time.

The truth is, old dogs - I’ve qualified as one for a while, now - already know enough tricks to get by. They’ve filtered out the ones that aren’t useful and have stored away in their trick bags all the good ones. So, it’s not that they can’t learn. They just don’t want to.

When I decided to become a full-time writer, I had to learn a lot of new stuff. I had to learn about marketing, cover design, composing product descriptions and ad copy, how to negotiate the Amazon advertising platform (whew, is that complicated!), and…mass emails. These were all things I had previously no interest in. Suddenly, I was very interested - because I had to be.

I’ve learned all those tricks.

I’m not saying it’s been easy. But being an old dog has not held me back at all. Now, I’m adding audiobook recording to my skill set. Check out the pic below. It’s my home recording studio. The blanket thrown over the patio umbrella is a sound-proofing recommendation from recording guru, Derek Doepker. I know it looks funky, but it works. 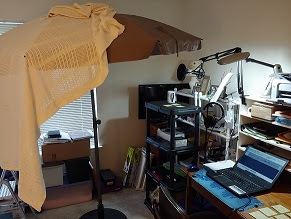 I’ve been putting the above studio to work. I’ve recorded Chapter One of The Cargo (only ten more to go!) so far. It took a while to get through it, but I’m getting better and faster with the process as I gain experience.

The Half Human Saga (series sequel to The Cargo) is progressing slowly but surely. I have about six chapters left to write in the series starter before I send a draft out to beta readers. ARC Team, get ready!

I got this great response to last email’s “inhale or exhale” question from Chris R:

“I really can’t separate them. Breathing is my connection with everything around me. I draw in deep, down to my belly. I hold for a moment, mixing what I drew in with what is in me, letting it marinate, then I exhale, sharing what is in me with my surroundings. Everyone and everything is connected, the breath is one of the means of that connection...”

Kind of spiritual, don’t you think? I love it.

Is there some “new trick” you’ve learned that you didn’t think you could? What made you overcome your reservations? Reply to this email with any thoughts you’d like to share.

First of all, congratulations to Gary F, who won the signed copy of Rivers of Red from last month’s giveaway. It should be on your ‘doorstep’ soon, Gary!

This month, I’m giving away something I’m sure anyone can use: a $25 Amazon Gift Card. Click the link to enter. <Link Expired>

[Readers: click on the Newsletter tab on this blog site to receive monthly updates by email, chances to win free stuff, and get a free download of The Alchemist's Ledger.]