So, I’m continuing my complaint about getting hooked on a series of books that hasn’t been finished yet. Can you relate? I mean, it really sucks to read that book (and maybe there’s even a cliffhanger ending), and you’re ready to find out what happens next, but you know it’ll be at least a year until you can find out.
Ugh. Life is so hard.
Perhaps I’ve been spoiled by growing up with TV. The longest I’ve ever had to wait to watch the next episode of a show is maybe three months over the summer, waiting for a new season to begin. It’s different with books. Very few authors crank out a whole novel in three months. It took me nine months to finish my first, almost two years for my third.
Case in point… 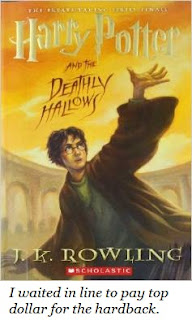 Like many others, I discovered J.K. Rowland’s Harry Potter books when only three of the eventual seven had been published. By the time the final book was out, my infant son had grown up to be reading them himself, there were movies made and planned for, and a whole pop culture grown up around the phenomenon. I stood in lines at book stores and paid way over top dollar for hardback copies of the last three, which, had I been able to wait a few years to read, could have purchased the whole series for my Kindle at a fraction of the cost.
It’s not fair.
Well, here’s another one… Australian author Kristy Berridge’s unfinished series featuring the sassy, headstrong vampire/werewolf hybrid teen, Elena Manory. I stumbled onto The Hunted back in early 2012. I impatiently drummed my fingers for about a year waiting for the Kindle edition of The Damned to come available in the States. Then, I twiddled my thumbs in exasperation while the author went out on a tangent writing Diary of a Teenage Zombie before I was able to download a copy of The Aligned a few months ago.
Here’s the problem. The books are gooooood. And I have no earthly idea when the next one’s coming. Check ‘em out… 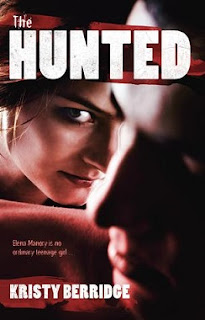 
I became aware of this author through several Facebook groups, where her posts caught my attention as occasionally witty. I likewise found her blog posts enjoyable, but was hesitant to purchase this paperback because of the hefty price tag. I couldn't bring myself to pay over $18, but I jumped at the chance to get it for half that when it finally became available for Kindle.
I wasn't disappointed. Berridge has created an interesting universe with some unique twists on the origins, traits, and capabilities of her vampires and werewolves. The book is generally well-written. It was easy to immerse myself in nearly every scene, and there is lots of action. By the time I was two-thirds through the book, I found myself unable to put it down - one of those ones I stayed up until the wee hours of the morning finishing.
Several things prevented me from giving it five stars, however. I did not find the main character particularly likeable, nor the inevitably hunky vampire love interest. And the propensity for Berridge to dump pages of backstory upon the reader at inconvenient times also put me off. The preface and the first chapter contain enough background information to spread over several novels, and Berridge chooses to reveal much of it while her character muses between steps as she stalks two werewolves in the opening scene, which effectively kills the suspense.
Despite those few drawbacks, The Hunted was a good read and I plan to read the next in the series, at the right price. My rating? Four stars. 
The Damned (August, 2013)
I lost patience somewhere over the 16 months I had to wait for this sequel to The Hunted to be ready for my Kindle. And now it’s even worse, because now I have no idea how long it will be before the third book is available and I can find out how Elena’s going to get herself out of… Oh, wait. No spoilers here!
The Damned is a great second offering in this series. It starts with the introduction of a new villain and a brief warm-up/update of what’s been going on since the last book, then takes off with non-stop action until the final page. Elena has matured some over the last six months, but not enough to keep her out of immediate trouble as she tries to keep her family safe by leaving home and placing herself in the custody of the Protectors in Bucharest.
“Custody’ turns out to be the operative word, because she quickly realizes that, instead of being protected, she is actually a prisoner. She manages to exacerbate the situation further by alienating almost everyone with her snarky attitude and sarcastic comments. To make things worse, everyone is out for her blood… literally.
I was intrigued with how the story expanded in this book, in which more of the secret of Elena’s origins are revealed and some older, more powerful characters are introduced. Of course, there are more gorgeous, hunky male vampires (a necessary evil in these types of novels, I suppose) to create plenty of sexual tension, which makes for nice reading but emerges as a theme I’m sure will be more explored as Elena approaches her eighteenth birthday, where I bet the excrement will really hit the fan.
I was also happy to see that Elena’s brother, Lucas, remains in the picture and that he will obviously play a larger role in the saga as they both deal with the ultimate betrayal. And I’m hoping there will be more of Lucius, a character I particularly bonded with, to come in the third book.
Which brings me to the final negative aspect of this whole thing. I’m a glass-half-empty kind of guy, and I anticipate a long wait for book three. That’s not fair, because I’m ready now. Oh, well. Kudos to Ms. Berridge on this one and a resounding five stars. 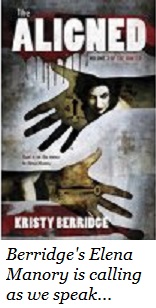 
The Aligned
(April, 2015)
I’m not complaining (Okay, yes, I am), but I had to wait nearly two years between the release of The Damned and The Aligned, the third novel in Kristy Berridge’s Hunted series. Now, after devouring the latest installment in the saga of the werewolf-vampire hybrid, Elena Manory, I’m already chomping at the bit, ready for another.
It’s problematic reviewing this book, because although there is plenty of everything I love in a middle-of-the-series novel – non-stop action, sexual tension, behind-the-scenes characters revealed, and emerging powers…uh…emerging, I can’t think of a way to elaborate on any of it without creating spoilers.
Suffice it to say, you should read this entire series. If you haven’t already, go back and get The Hunted and The Damned. Afterwards, get The Aligned as fast as you can. Then, sit back and chew on your nails with me until the fourth book is out!

Here’s an interview with the author I found on YouTube… 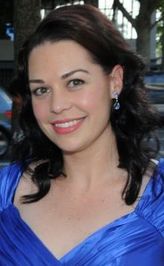 And, if you really want to get hooked on an unfinished series, check out the MY BOOKS tab at the top of my blog. It’ll probably be another year before Rivers of Red is out.


Yeah, I know. Believe me, I know.
Kristy Berridge The Aligned The Damned The Hunted The Red Wolf Saga