The Unfinished Series Series, Vol I

May 20, 2015
I’ve been in love with books written in a series for as long as I’ve been a reader. Beginning with L. Frank Baum’s Oz books as a child, through Edgar Rice Burroughs’ Tarzan series or Asimov’s Foundation Trilogy as a “tween,” all the way through Richelle Mead’s Succubus books and Charlaine Harris’ Sookie Stackhouse novels in my later years, I’ve relished finding multiple novels by an author that follow the same character, sets of characters, or an imagined universe, over time. I relish closing the cover on one book and opening another into that same wonderful universe right away.
But, it’s a mixed blessing finding a great book that turns out to be the first in a series, getting hooked on the characters, the premise, or the background story, and then finding out the sequel has yet to be written. That’s a huge disappointment for me as a reader.
Now, as an author of my own series, I’m getting to experience the anxiety from the other side of the coin. Along with every compliment I get from readers of my Red Wolf Saga the question that follows is, “How soon until the next one’s ready?”
The reader in me winces. I want to tell people to wait and read my books when the series is finished. Hey, the price might even come down a little.
But, I can’t do that!
Instead, I’m going to pay homage to some other authors who have some great unfinished series in the works. I call it my Unfinished Series Series. It won’t solve the problem, but the pain should be lessened through commiseration with reader and writer alike.
So, where to start?
I know!
A few weeks ago, I woke up to the following Facebook post:
“You haven’t truly lived until you’ve considered whether or not you should give a chicken an enema.” 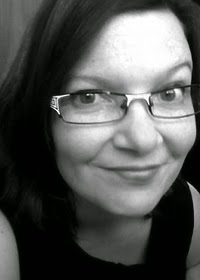 That post could only come from the mind and keyboard of Red Tash, author of the delightful Trollogy, A Fairy Wicked Tale. The “trollogy” is a coming-of-age story as much as a dark fantasy, and follows the character of Roller Deb as she comes to terms with growing up issues such as her sexuality, her obsession with skating, and her heritage as a fairy warrior.
Red Tash gets points not only for being a great writer who publishes under various names across a number of genres, but also for one of the most clever series of titles I’ve ever run across:
Book 1: Troll or Derby
Book 2: Troll or Park
Book 3: Troll or Trash
Get it? Ain’t it great?
Yeah, it is, except for the fact that only the first two have been published. My reviews of those follow. I loved them. I recommend them highly. And, I welcome you to join the rest of us who are waiting impatiently for the final episode. 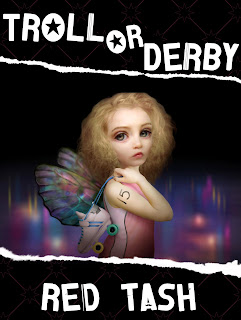 View on Amazon
Troll or Derby is Paranormal Americana at its best. It starts out at a dead run as teenaged Roller Deb rescues her older sister from a meth lab fire and the pace only increases from there. Ms. Tash is a former journalist, and it shows. There is not a wasted word in the whole story. There’s no time for background explanations or character development. You need to keep your head up and your eyes and ears open and get ready to duck ‘cause the next thing’s coming at you already. Yet somehow, amidst all the chaos, I came to know the characters and their world pretty well by the end of the book and am eagerly awaiting the sequel.
This is an action book and to describe any more of it would risk spoiling something for the reader. But aside from the pace there were two particular things I liked about the book that bear mentioning. The first is the author’s talent for saying a lot in few words. Here’s an example, where Deb sums up her relationship with the evil April, “My heart both longed for her and ached for its own stupidity, at the same time.” Man, it would have taken me half a chapter to say that!
The other thing I liked about the book was the very natural, off-hand treatment of Deb’s sexual orientation. It’s an important element of the story, but at no point does it become the central theme. This is the way it should be, and in my opinion does more for gay rights than any amount of preaching from the soap box, which I’ve done more of in the last sentence than Tash does in the whole book.
I was a little disappointed there wasn’t more roller derby action, something I was expecting from the title, but that was not enough to keep me from giving Troll or Derby five stars. And the author has promised us more derby action in the upcoming sequel, Troll or Park. Dollar-for-word, this is the best thing I’ve read all year. 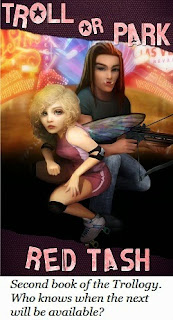 View on Amazon
The second book in the trilogy (excuse me, trollogy) involving Roller Deb, Harlow, and the various supernatural creatures living among the loveable rednecks of Laurents County, is finally out, and it was worth the wait.
Just like Troll or Derby, Red Tash opens Troll or Park with a bang. Whereas the first book had Deb rescuing her sister from a meth lab fire, this one has her deflecting an angry mob from going after her well-meaning friend Derek, who has accidentally burned down the Legion Hall with a fireworks display gone awry.
But that’s just a wake up and warm up to the non-stop action to follow. Deb must fight off evil fairy witches, dragons, and usurpers to the local Troll throne while simultaneously dealing with feelings for Harlow, the troll she may or may not be falling in love with, who is currently in the thrall of a seductive female troll who has him addicted to a mysterious honey concoction that seems to have magical origins.
Not wishing to address her feelings about Harlow, Deb attempts to lose herself in her first love, the Derby. She joins a roller derby team and heads to Las Vegas for a very special tournament. But, her attempted escape turns out to be a trap. Powerful forces are at work in the world of the Fae, and some of them look on Deb as the key to success for their nefarious schemes.
Red Tash, an excellent writer across a number of genres, has the ability to create characters, no matter how unlikely, that draw you into their world. I’ve come to love Roller Deb, and I can’t help but root for her and Harlow. Red’s writing style will delight you. I can’t wait for the final book. Five stars.
Red Tash Red Wolf Saga Troll or Derby Troll or Park