April 25, 2015
The term red wolf must have been floating around in my subconscious when I conceived of Clifford Crane, the supernatural werewolf protagonist depicted in my Red Wolf Saga. Crane (you can check out the “My Books” tab), whom I imagine to be a cross between an Irish setter and an eight foot grizzly, bears little resemblance to the coyote-colored canid that once roamed the eastern North American continent in large numbers a few hundred years ago.
But, yes, there are real red wolves! And it wasn’t until I was almost ready to publish The Draculata Nest that I discovered they are living practically in my own back yard. 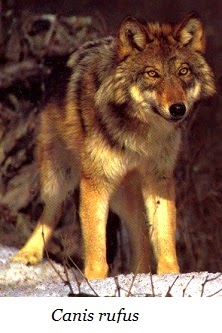 Like its grey wolf cousin, which already haunted the dreams of European settlers, the red wolves were regarded as everything from a threat to domestic livestock to agents of Satan. The “new Americans” went about systematically destroying the wolves’ natural habitat and hunting it to near extinction. Today, Canis rufus can be found living in the wild only on the Albemarle Peninsula of eastern North Carolina, the result of an intense recovery project managed by the United States Fish and Wildlife Service.
When I realized real wolves hunted in forests only a few hours’ drive from my Charlotte home, I couldn’t help myself. First chance I got, I made a road trip on the pretense of “research for the next book,” imagining I might somehow get a glimpse of this legendary creature by hiking around the Alligator River Wildlife Refuge.
Good luck with that, John. Mosquitoes the size of quarters kept me inside my vehicle and off the trails, and although I saw plenty of wildlife as I drove over the many dirt roads that crisscross the refuge, including several black bear sightings, it would have been highly unlikely to run across the elusive predator I later found was notoriously skittish of human contact.
The trip wasn’t a total loss, however. I ended up using the refuge as the setting for much of both The Dragon of Doughton Park and Red Wolf Rising. But my subsequent research on red wolves has been done primarily on the internet and, most recently, by way this book: 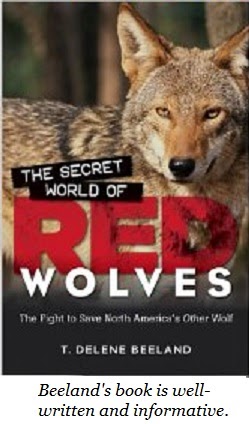 The Secret World of Red Wolves on Amazon

T. Delene Beeland’s The Secret World of Red Wolves, chronicles the story of the federal Fish and Wildlife Service’s successful efforts to rescue Canis rufus from the brink of extinction after it became one of the first species to be put on the Endangered Species list back in the 1970’s. It is one of the finest examples of scientific journalism I’ve read. I highly recommend it, both for the heart-warming/wrenching story behind the recovery project and for the extensive bibliography that comprises a full quarter of the book.
If you read it, I promise you’ll be inspired by the perseverance of the individuals who dedicated much of their lives and careers to try and save this creature. If you’re like me, you’ll probably fall in love with Canis rufus. And, if you’re like me, your heart will come away a little more broken.
Sadly, the red wolf recovery project has become somewhat a victim of its own success, and the creature that was miraculously saved from the brink of extinction over the last few decades will likely disappear by way of the same threats that originally endangered it, shrinking natural habitat and hybridization with the smaller, more prolific coyote, which has an adaptability akin to the cockroach.
But, the most immediate threat to red wolves is North Carolina politics. Nowhere in the nation is the current polarization of political opinion in our republic more evident than in my beloved Tarheel state, where blacks, whites, Hispanics, Arabs, Jews, and Asians live together in harmony, but conservative, Bible-thumping Republicans fight latte-sipping liberal Democrats to the death in vitriolic, economy-depleting election campaigns.
In my books, I blame the political polarization and legislative gridlock on vampires. Sometimes I wish my little fantasy conspiracy theory were true. It would be so much simpler to deal with. Unfortunately, the political divide here is more complicated, and Canis rufus is just another innocent victim of it.
Since its inception, a critical factor in the success of the red wolf recovery program has been the ability of key individuals who perform the day-to-day field work to form good faith, working relationships with local landowners. The folks who own and manage red wolf habitat land on the Albemarle Peninsula are savvy enough to recognize the benefits of the ecological niche this larger predator provides, but they are extremely resistant to government or any outside dictates on how to manage what is theirs.
A recent lawsuit brought by well-meaning-but-ultimately-misguided red wolf supporters to change hunting regulations in the area has created a wedge between local landowners and managers of the recovery program. Conservative political lobbyists have pounded on that wedge to the point where it is nigh immovable. The good-faith, handshake deals program workers have made with the locals have become null and void in almost every case.
When I had a chance to attend a presentation by author Beeland recently at our local community college, I asked her if she thought the program managers/landowners relationships could be repaired. The emotion in her voice was evident as her scientific objectivity crumbled. There was a note of despair in her tone when she answered the prognosis was “not good.”
The federally managed recovery program on the Albemarle Peninsula will soon be turned over to the state of North Carolina, whose plans to “manage” the program include little more than studying the animal as it rapidly becomes extinct.


Alas, most of us will never see a true red wolf. Even the ones on display in zoos and preserves are likely not true Canis rufus, but more likely a mostly wolf/coyote hybrid. So, in the meantime, join me in a brief lament. Click on the YouTube link below, raise your snouts, and join some red wolves in a farewell howl… 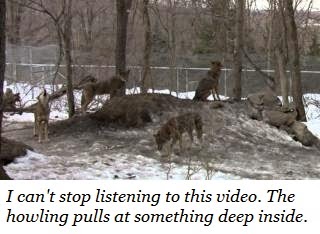