A Mermaid and Amanda Lyles

February 17, 2015
Hi, folks! I haven’t posted since June, 2014, but now that the third novel in the Red Wolf Saga is scheduled for publication on March 6, I’m emerging from my writing cave.
Yes, the Red Wolf is back!
I’m going to start blogging again with renewed vigor, and I’m kicking off the year (a little late, I know) with a series of reviews of books by some indie authors I met on Goodreads.
First up: Amanda Lyles!
I met Amanda in a Goodreads group when her first novel came up as the review of the week. It was about a mermaid! I couldn’t resist. I volunteered as a reader/reviewer, and got hooked on the Nina Garnet character immediately. I read the first book and posted the review below. Then – and this is a cool thing about Goodreads – I was able to contact the author, who accepted my offer to beta read the second book.
So let’s get started with reviews of the first two Nina Garnet mermaid books, and then have a brief chat with the author… 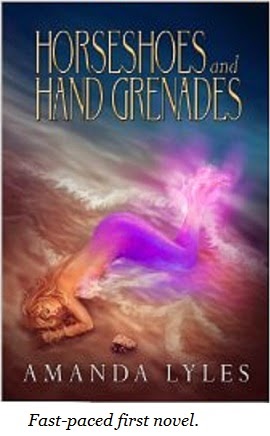 Horseshoes and Hand Grenades, the first book in an upcoming series, introduces the character Nina Garnet, a young mermaid several years estranged from the mysterious tropical island where she grew up and the VIP mermaid parents who reared her.
Nina now lives on the big island of Hawaii, where she covers her secret paranormal identity by working as the owner of a diving shop, often contracting with the local police to recover dead bodies and such from the surrounding waters. One such recovery kicks off the action in this novel, when the body turns out to be a werewolf, and Nina is suddenly thrust into the middle of the goings on of the local supernatural community, which she has been trying hard to avoid in order to keep her own identity a secret.
I have to admit, I have a soft spot for mermaids, and when I heard this book had werewolves and dragons as well, I was compelled to read it. I fell in love with the character of Nina right away.
The strength of this book is its fast pace. Ms. Lyles doesn’t waste a lot of time with Nina’s background. There are only a few quick paragraphs in the early chapters, and we pick up more random hints at her past throughout the book. Instead, the story hits the ground running and hardly ever looks back.
There’s not a lot of subtlety to the plot; it’s pretty straight-forward. Ms. Lyle’s writing style is charming in its simplicity, and so is Nina, who regularly dismisses opportunities for introspection in favor of dealing with her immediate problems, of which there are plenty.
I felt this book had five-star potential. Unfortunately, it suffers from insufficient editing, at least the early 2014 edition I downloaded from Amazon. Regular errors in punctuation and run-on sentences tend to slow down the read. But not much. I thoroughly enjoyed reading this story, and I gave it four stars. I’m eagerly awaiting the sequel. I contacted the author via Goodreads, and she told me it was all but finished and would be available soon.
Good. The Hand That Rocked the Boat, the second offering by Ms. Lyles in the Nina Garnet series, retains the charmingly simple style and fast pace that attracted me to the first book. As any good second-in-a-series book should, it reveals and expands the heroine’s history and world and provides plenty of right-now action while hinting at an impending larger confrontation with the past she is running from.
Nina still operates a dive shop on the big island of Hawaii and works with the local police to recover dead bodies from the surrounding waters. Her mermaid identity has now become the worst kept secret on the island, as far as the supernatural community that lives there goes. But worse, her exploits are now beginning to draw attention from far and wide. While trying to help a skeptical police force solve a string of inexplicable drowning murders she finds herself fending off kidnapping dragons, identity-stealing witches, and soul-devouring gods, as well.
I had the privilege of beta reading this book, and I’m delighted to say that many of the editing flaws that appeared in the original edition of the first book are not present in the second.  There are some quirks in the writing style that could become annoying if you thought about them for long, but the action moves so fast I didn’t have the time. I couldn’t put the book down, and after having had a second dose of Nina, I’ve become addicted. I’m eagerly awaiting my next fix in book three. Five stars, Amanda Lyles! 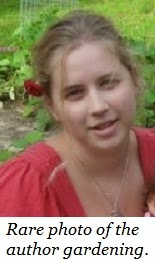 Me: What inspired you to write about a mermaid?

Amanda: I love to swim. I was on swim teams when I was younger and, while I wouldn't say I was the best swimmer ever, I was pretty good at everything but the butterfly stroke. Who invented that anyways?

Me: I don’t know, but I’m guessing it was a man, because it feels very manly to do it. Of course, I can only be manly for a short while. After about three strokes, I’m done.

Amanda: I would have loved to have been a mermaid so that's why I picked them.

Me: I can imagine, and I do. Nina also is a diver, in her human form. Do you scuba, too?

Amanda: I would love to scuba dive. Unfortunately I have serious trouble equalizing the pressure in my ears and that's very important for scuba diving.

Me: I can empathize. For me it’s the sinuses. I can only go down about 12 feet before it really starts to hurt.

Amanda: I have no desire to go deaf. Maybe one of these days it'll be better but I'm not going to hold my breath. :)

Me: No pun intended? Well, what are your future plans for the series?

Amanda: I do have future plans for Nina's series. I can't say much because it would give away a lot but don't be surprised to see anything happen. I'm not opposed to adding aliens or maybe even destroying the world and seeing how the characters react to that. I like giving them challenges.

Me: Wow, that would be challenging. But, I didn’t mean you had to give anything away. No spoilers, please! I was mainly curious as to how many more Nina books we could look forward to.

Amanda: I plan to have at least four books with those characters. I haven't been able to really see a story after that, but that might change.

Me: That’s good news, because I’ll be reading as many of them as you can crank out. Are there any other projects you have in the works?

Amanda: I do have other things in the works. Sometimes I just can't feel Nina or her world and need a break. I'm working on a book with a character who can control the weather and another book I'm working on is kind of a ghost story. I like paranormal stuff.

Me: Me, too, obviously. You’ve also dug up some rather obscure (to me, anyway) mythology in the last book, if I recall. Is that stuff authentic to the Pacific islanders, or did you make it up?

Amanda: The story of Mamala and Oahu is a real story. It is very obscure though. I searched for weeks to find the right story for me and then I twisted it to fit my needs. There were already several different versions of the story, so who knows, it may be true. Some of the places in the book, like the library and the Kahili Ginger National Park are not real. I made them up, though I wish that library was a real place.

Me: Oh, me too. You really conjured up a special place that resonated with me, and I imagine it would with anyone who read the book. I have a lot more questions, but we’re running out of time, or space, or cyberspace. Whatever it is, we’re out of it, so I want to thank you for doing this interview. I’m looking forward to enjoying your writing in the years to come.