February 06, 2014
Okay, I told you I wasn’t going to be posting much while I approach the deadline for my next novel, and I guess you guys were beginning to believe that since it’s been over a month.
But I had to give respite to the silence of the blog and take a short break from working on Red Wolf Rising (I’m getting tantalizingly close to the end!) to share this cool cover for Red Tash’s soon-to-be-released dark fantasy novel…

In the spring of 2012, while my editors ripped my first draft of The Dragon of Doughton Park to shreds, I was looking for something to read and stumbled upon Troll or Derby, which I promptly devoured.
I was so taken with the cleverly written tale of Roller Deb and Harlow the rock-star troll that I dashed off a quick five-star review and posted it on my blog. (Just so you know, an unsolicited review from me is unusual. I’m a tad on the lazy side when it comes to writing about anything but my own stuff.) It was just that good.
A day or so later I was surprised to find an email from the author herself, thanking me for the review. I responded, and she hasn’t been able to get rid of me since. (Hey, sometimes stalking works. You just have to know what you’re doing. Um… we can talk about that… another time.)
Since then, I’ve read nearly everything Red Tash has published, and it’s all good. I’ve also had the privilege of interviewing her on this blog. She’s even allowed me into one of her private social network groups, where I get to pick the brains of some real writers!
And, at long last… after what seems like years and years (although it’s only been about eighteen months, I guess), the second book in the trollogy will soon be on my Kindle (and yours, too, if you’re smart).
I… can’t… wait! 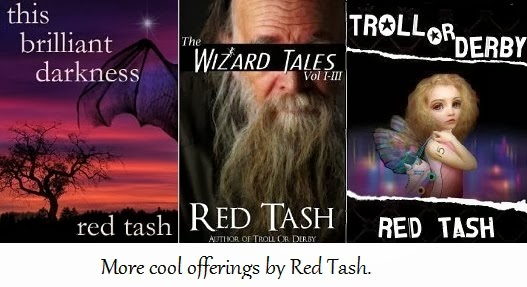 And, as always, if you’re looking for a great read – and cheap – click on one of the links below to order one of my books at only $2.99!
Until then… happy reading!