Another Look at the Mercy Thompson Series by Patricia Briggs

Hey, folks. Happy New Year! I’ve been neglecting the Red Wolf Blog for the last few weeks, and it may be a while before I do another post. I’m really pushing to get Red Wolf Rising ready for editing in the next few months, so blogging has been moved to the back burner of the writing stove, so to speak.
However, I just finished reading the seventh book in this wonderful paranormal series, so I thought it might be time to reprise a post I did last year, during my Top Five Paranormal Countdown, but this time include a review of the newest book.
Remember? The Mercy Thompson series, by Patricia Briggs, was number four on my top five list for a paranormal series… 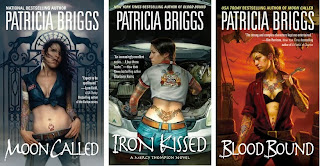 What I liked…
The heroine…
The tattooed, kick-ass Volkswagon mechanic named Mercedes is simply to die for, and characters sometimes do. An extraordinary woman engaged in the never-ending struggle to make ends meet, while dealing with any number of extraordinary situations, Mercy insists on doing it all on her own terms. If she likes you, she’ll risk life and limb to help you out. If she doesn’t like you, you’re just plain up shit creek without a paddle.

The werewolves…
They are part of Mercy’s past and present. I love the pack magic and the structure of the global werewolf hierarchy. Some of the characters also appear in other series by Briggs, such as the Alpha and Omega stories.

The Fae…
There are some great allies and villains from the Faerie world in most of these novels, including Mercy’s former boss, who appears more than once.

Mercy’s cloudy past…
… is slowly revealed as the series progresses. I’m hoping there’s more to come.

The action…
These books are fast-paced. It’s hard to find a place to turn off the light and go to bed. 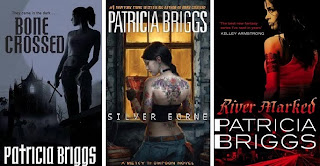 What I didn’t like…
The sexual tension fades…
Mercy chooses a mate by the fourth or fifth book, and the series shows a marked decline for me at that point. I’m still struggling to get through River Marked, mainly for that reason. I’m hoping Frost Burned, which just came out in March, will re-kindle my flame.

What I stole…
The omega werewolves…
Okay, technically, the omega wolves are in Briggs’ Alpha and Omega stories, but I found those while looking for more Mercy Thompson. The idea of a type of werewolf who has a calming effect on the dominant wolves and is not so much affected by the dominance of others is essential to my own Red Wolf saga. And it was the “what if” question of what a male omega would be like that was the original impetus for my series.

Okay, that was then. Now, that review I mentioned… 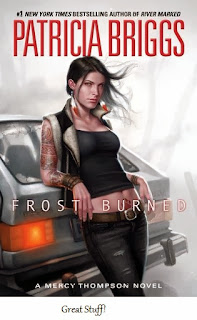 I am so vindicated. It turns out I was right not to abandon my favorite coyote shape-shifter after only one disappointing book in this wonderful series. Patricia Briggs rebounds from River Marked with a five-star offering in Frost Burned, the seventh of the Mercy Thompson novels.
I’ve said before that I thought the series started downhill after Mercy chose a mate. I don’t care anymore. Frost Burned is non-stop action from the get-go. Mercy and her step-daughter are out shopping for some Black Friday bargains when it all starts. She discovers the entire Columbia Basin Pack of werewolves has been kidnapped, including her mate, Adam Hauptman.
By using the magic of the pack bond, which she can now tap into as mate of the pack’s Alpha, Mercy determines that rogue government agents are holding the pack hostage in an effort to coerce Adam into assassinating a high-profile politician, embroiling the wolves in a public relations nightmare that will certainly dissolve the tenuous rapport the supernatural wolf community has been carefully building with the general public after recently outing themselves.
That’s all bad enough, but it turns out things are not what they seem. As she sets about trying to rescue the wolves, gradually peeling away the layers of intrigue, Mercy finds the real target of the plot is herself, and she is drawn into a confrontation that puts not only her life on the line, but perhaps those of every human on earth.
This is as good as anything Briggs has written so far. Mercy is as tough, sexy, sassy, and indomitable as ever, and I give it five stars.

I can’t wait to read number eight, Night Broken, which is due out in March. 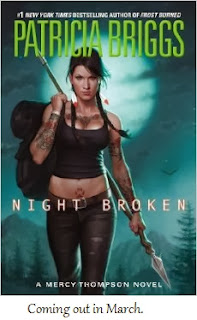 Okay, now, that’s it for today. Look for me again in a few weeks. In the meantime, Happy Reading!