Hi, folks. Got any Halloween candy left? I missed out on trick-or-treat this year. My son is fourteen and has outgrown the activity. (I mean really outgrown. He stands about 6’1” and scares the bejeesus out of me sometimes, even without a costume.)


I miss taking him out like I did when he was little. And I miss eating all the candy rejects, the stuff he didn’t particularly care for. This year he went to a party, dressed as a banana. 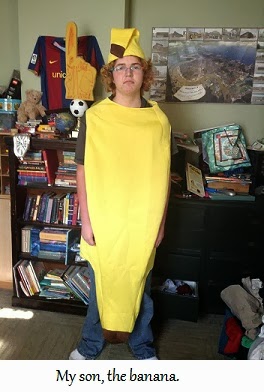 
I’m moving into some uncharted territory on the blog the next few weeks. I’m going to continue to share the background story of Clifford and Claire, since folks started asking about it even before the first Red Wolf novel was finished. But so far, I’ve been telling it in excerpts from the upcoming Red Wolf Rising (projected for Spring, 2014 publication). The next little part of the story is still being written. It’s the first draft, and I’m not even sure it’ll end up in the book. Readers of my blog may be the only ones to ever know.


…was a hard choice after just finishing Abraham Lincoln: Vampire Hunter, by Seth Grahame-Smith. I loved his writing and the whole conspiracy-theory premise behind the book (which will resurface as part of a future blog post, I’m sure). I mentally prepared myself for a letdown while perusing my TBR list. After all, not every book is such a gem.


Then the first book in Skye Callahan’s new Darkness Bound series popped up free on Amazon, so I snatched it up. A sister team of paranormal investigators? The pace seems pretty good. I read the first few pages after I downloaded it onto my Kindle and almost got sucked in, but I was running late for a meeting and had to put it down. I’ll let you know what I think later. 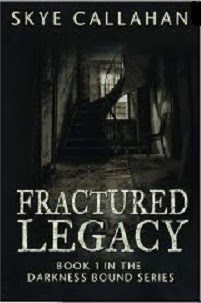 
An important element in the saga of the rise of the Red Wolf of Prophecy – one of the contributions to Clifford Crane’s resistance to his destiny – is discovering that his former lover knew of the prophecy all along. In fact, Claire Deerfoot was the very one to receive the prophecy from The Dragon five hundred years before. Yet, in all the time she and Clifford were together not once did she mention it to him, and she took the knowledge with her to her grave. Why?


Well, it turns out that just before she brought out his wolf she paid another visit to The Dragon. Here’s what happened…
Claire Visits The Dragon, Part 1…
December, 2003
Claire Deerfoot stood alone on the outcrop of rock. She was panting from the exertion of the climb. Foggy clouds rose from her snout like steam from a locomotive that had just rolled into the station.
She wasn’t sure this was the place. It looked much different than it had five hundred years before. It had been virgin forest then. And the deer path she’d followed way back when was now a recreational hiking trail.
She lowered her nose to the ground and inhaled the faint scent of scorched rock. It could just be from an old forest fire. Or, it could be dragon’s breath. No matter. She’d find out soon enough. In a few minutes the moon would rise over the trees. If this was the place, and the magic was still around, moonlight would reveal the path to the eyes of her wolf.
She sat on her haunches. She took in the scents and sounds of the forest at night. Her mind wandered, as it often did lately, to Clifford Crane. 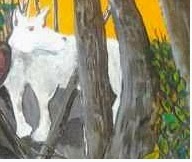 It wasn’t a proper howl, since she was in human form, but it served its purpose. It vented her frustration, and she felt better immediately. She took a deep breath and let out another. Then one more, for good measure.
She was startled by a voice from above. “Ho, there!”
She turned towards the sound. A huge man, sporting green hair and a blacksmith’s apron, stood on the ledge above.
“Well, I’ll be damned,” he said. “Claws-On-The-Foot! Is that you?”
More to come next week in part 2. Until then… Happy Reading!
----------------