Hi, folks. I’ve been remiss in my blogging lately. It’s because I’ve been working on the final book in the Red Wolf trilogy, Red Wolf Rising. Therefore, I won’t apologize. Instead, I’ll share with you a little of what I’ve been writing.
From the first beta reader of The Draculata Nest, folks have asked for more of the back story of the relationship between Clifford and Claire, his deceased lover, the one responsible for turning him into a werewolf. Then, in The Dragon of Doughton Park, there’s that surprise ending that makes you wonder… 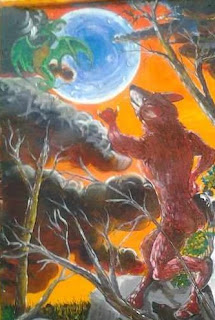 In Red Wolf Rising, Clifford and Claire’s story will be told in a series of flashbacks while… (whoops, can’t reveal that, yet). Anyway, over the next few weeks I’ll give y’all a sneak preview of their first encounter. Here’s scene one. Clifford, during an early morning jog, has nearly run into a large white “dog”…

Clifford Crane stood rock-still, staring into the underbrush at the side of the trail into which the huge white dog had disappeared. His heart was pounding in his chest, and he could feel his legs twitching and shaking as the muscles cooled and the adrenaline rush faded. That was no dog. That was a fucking wolf!


No, that was impossible. There were reportedly coyotes in the greenway, but no wolf pack could survive in this limited range of territory. (How did he know that?) But he’d looked into her eyes. (How did he know it was a female?) There was a shocking intelligence in them.


Over the pounding of the pulse in his ears he could hear her crashing through the woods away from him. The noise soon faded and then stopped altogether. Was she now watching him from the cover of the underbrush, with those eyes?


He took a deep breath and exhaled. The light breeze blew the condensation back in his face and fogged his glasses. Shit. He needed to get moving in order to clear them; his sweat-soaked shirt would never do the job.


He took a step, then another. Ouch. His calves threatened to cramp from the sudden resumption of activity, another reminder that he was getting older. It took him longer to warm up these days yet his body cooled so quickly. But he soon settled into a steady rhythm, and the cramping receded.


He’d been counting steps, since he often missed the mile markers along the trail in the dark. He tried to resume his count, but his encounter with the wolf-dog had caused him to forget where he’d left off. He started over. Step-step-step. One. Step-step-step. Two. Count to one-hundred-twenty, then walk for a count of sixty and start jogging again.


He soon lost count as the vision of the snow white wolf-dog intruded on his thoughts. Had someone’s pet gotten loose, somehow escaping the confines of one of the apartments in the complexes that bordered this side of the greenway? He hadn’t noticed a collar, but the encounter had been rather sudden and he’d been focused on those clear gray intelligent eyes.


Maybe he should try to lure the dog to him, see if there was a collar after all, maybe with an address or phone number. The owner of such a beautiful animal would probably be frantic with worry. His steps began to slow. He stopped and looked uncertainly back in the direction the animal had disappeared. He’d frightened her as much as she’d frightened him. She was probably long gone. Too bad, he thought, I’d really like to meet the owner.
He resumed jogging. Step-step-step. One. Step-step-step. Two.

For those of you who read the first two books, I hope that scene gives you something to chew on. If you haven’t read them, there are links below to sites where you can purchase them in various formats. The ebooks are only $2.99! Check ‘em out, and see what the hoopla is all about.