Jogging in the Dark


Happy Sunday, readers! I know some of you are champing at the bit for news of The Dragon of Doughton Park. I sooooo want to release it before Halloween, but I still don’t have the cover available. I am waiting… patiently (yeah, right). We are a step closer, however, because this week Rich Westover provided me with an outstanding re-design of the cover for the new, improved edition of The Draculata Nest, which will be released along with Dragon. I think this will be much more attractive on bookshelves than the original. Check it out… 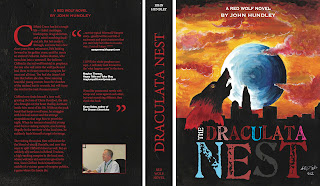 Now that he’s done with the first one, and we’ve established somewhat of a theme, he expects the next cover to be available relatively quickly. Yaaaay! Not only are these books beginning to look as good on the outside as readers have found them to be on the inside, but they will be released in an expanded number of venues.


Well, for those of you who didn’t read the original blog post, “Battle of the Bulge,” you may have been wondering what the number is that has appeared at the top of each post recently. It is my weight, in pounds. Yes, I’ve been trying to shame myself into losing 15 or 20 of those for health and aesthetic reasons. Overall, I can’t say it is working all that well, as you can tell from this week’s number, but I am committed. This week I took another desperate step towards the world of thin. I started jogging!


Jogging is old school, I’ll admit. There are any number of kinder, gentler aerobic activities with better health benefits around (Zumba, anyone?). My chiropractor suggested I not jog too much a few years back, and my usual aerobic activity since then has been cycling.  But with my work schedule and the days getting shorter, I can’t find enough time during the daylight hours to ride.


But, I can jog in the dark. In fact, it’s the best time to do it. No one can see me. The darkness wraps me in a warm blanket of anonymity. The reduced perspective from the lack of light makes it seem like I’m going faster. As long as I don’t run into a tree or something…


So Tuesday morning my alarm goes off at 5 am. The weather forecast is for clear and not cold. My plan is to allow myself a half-hour warm-up, hit the jogging trail by 5:30, and make it back by 6:30 or so for a shower and breakfast. I can be at work by 7:30, exercised and ready for the day.
But motivation is lacking. I automatically hit the snooze button, yet before I can drift back off to sleep I have the mother of all sneezing fits (allergies – it’s that time of year for me), which wakes me sufficiently that I haul myself out of bed. I pull on some sweats and stand barefoot in the dark of my living room. I only have 15 minutes left now, and I haven’t begun my warm-up
I lift my arms over my head and inhale deeply, which morphs into a huge yawn. I try to start loosening up the vertebrae in my upper back with some neck and shoulder rolls. My chin drops to my chest and stays there. I start the internal pep talk…
Are you asleep?
No. I’m doing neck rolls.
Then move your neck.


We continue in this vein for another ten minutes. It’s time to go. In fact, it’s past time, already 5:35.
We gotta go.
I’m not warmed up yet
You can warm up on the walk to the park.


My internal motivator makes sense. We’re out the door, and as we walk the two hundred yards or so to the greenway, I do begin to warm up. In fact, it’s nice out this morning, and as I emerge from the wooded path that connects my apartment complex to the park wherein lies the greenway, it is suddenly all worth it.
A waning gibbous moon illuminates the landscape, a gentle slope past soccer fields and a dog park towards the jogging trail that lies just across McAlpine Creek. A few bright stars are prominent in the sky, and the slope leading up towards Sardis Road on the other side of the creek is like a giant Christmas tree lit with lights that move through yellow, amber, and even the red of the blinking safety lights marking a cell phone tower. It’s beautiful. What a way to start the day!


When I get to the trail, I stretch my legs one final time and take off jogging. I’ll go to the first mileage marker, walk some, then start jogging again. There’s a spring in my step. I think maybe I’m not in that bad a shape after all. But as the air begins to hit spots in my lungs that haven’t had oxygen in months, my breathing becomes labored. I’m gasping for air when voices startle me from behind. A group of three runners passes by, thin, shirtless, and chatting to each other like they don’t even have to breathe. They fly past me like I’m standing still.
I am standing still. I’ve stopped. Can’t breathe. I force myself to start walking, and notice that I’ve reached my mileage marker. Okay, I was going to start walking at this point anyway. I meant to do that. Yeah, that’s it.
I begin to catch my breath as I continue to walk, but I become aware of a dull ache in the front of my left leg at the hip joint, a reminder of the stress injury that sidelined me that last time I tried this.

It’s all in your mind.
Feels like it’s in my leg.
Huffing and puffing, I skid to a stop at the next mileage marker and begin walking, this time with a distinct limp.
You made it.
My leg hurts.
But you made it, and you’re not sucking for air as bad as you were. Walk it off.


I do walk it off. It actually feels kind of good to be breathing deeply. But the next mileage marker comes too soon, and it’s time to jog again. With the first step, the ache in my leg becomes a sharp pain.
Ignore it.
The sharpness of the pain subsides, but radiates across my pelvis to my other leg. I hobble to the next mileage marker and start walking again. This cycle of torture and respite continues for about two miles until I finally reach my goal. I stumble out of the woods at the edge of a small lake. There is a warm glow in the east and a gentle mist that hangs over the calm water. A gaggle of Canadian geese glide gently through the mist in a V-formation and ski gracefully to a stop in the middle of the lake.
It’s an idyllic scene. But I miss it. I’m in total pain from the waist down. I can barely put one foot in front of the other, and my eyes are glued to the ground lest I stumble and fall. I stagger past the geese, listing back and forth across the trail like I’ve downed a fifth of bourbon. The gentle slope back up to my complex feels like I’m climbing Mount Everest. I can barely make it up the stairs to my second floor apartment. I sink painfully to my knees in my living room, knowing that if I don’t stretch it’ll just get worse.
Table again?
Shut up.
After a few minutes, I’m done. I don’t remember if I’ve stretched, but I’m in a different position, so I must have done something. It hurts to stand up. It hurts to walk. A warm shower gives some temporary relief, but I’m moving so slowly that I’m almost a half-hour late for work. Co-workers keep asking me what’s wrong. I tell them I jogged this morning. I get no encouragement, only looks of concern or insensitive laughter.
Folks, it took me almost two days to recover from that episode. I tried it again on Friday. I went a little farther, it didn’t hurt quite as bad, and it didn’t take me as long to recover. But I’m not sure if I’m going to keep it up. I kind of have a “no pain, no pain” philosophy. Jogging hurts, and I think my body’s trying to send me a message. I’m going to think about it, body, and get back to you on that.
Hey,remember, folks:
From now until the time Dragon goes on sale, the ebook price for The Draculata Nest has been reduced to only $0.99. You can purchase it through one of the following venues. Click on the link that applies to you.
DNest for kindle     DNest for nook     DNest in paperback     in Charlotte
Until next time… Happy Reading!
Posted by John Hundley at 12:16 PM