What's in a name?


Happy Sunday morning, folks. The past week has flown by, and it’s already time for my weekly blog post. I wish I had some more news about the release of my new novel, The Dragon of Doughton Park, but I don’t. If that’s what you came here for, I’m sorry. Don’t leave yet. I do have something cool to share with you. And then, there’s always my incredibly insightful ramblings to follow.
Since I joined the world of indie authors last year, I’ve made a number of interesting friends by way of Facebook groups, blog tours, etc. One of them is Maghon Thomas, who does a regular blog, Happy Tails and Tales Blog. She reviewed my first novel and I was lucky enough to persuade her to be a beta reader for the sequel. She’s also a Cajun lady, and has been trying to coach me in my struggles to nail that dialect for one of my characters, the werewolf (or, rougarou, I suppose would be more accurate?), Cynthia Lamelle. This week she vindicated my efforts by bringing the character to life on Youtube with a reading from the new book! Y’all can check it out by clicking the Maghon on Youtube link below. 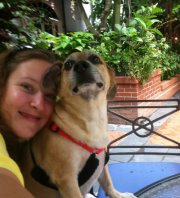 
I opened the fridge Saturday morning to see what’s for breakfast. All I found was a single egg and a bag of bagels. I don’t know what I was expecting, because this is the standard scenario towards the end of my two week pay cycle. Nevertheless I was disappointed. I wasn’t in the mood for an egg, and the bagels were scavenged from the leftovers of a company brunch the week before, I’d been eating them every day since, and I was tired of them. But, if life gives you eggs and bagels…


I improvised a meal my Mom used to prepare she called Eggs Alabama, where she cut a hole in a piece of white bread, broke an egg into the center, and fried it in the pan. I widened the tiny hole in the bagel, melted some butter in the skillet, and went to work. As you can imagine, it was a poor substitute. For one thing, it wasn’t Mom’s (although I’ve been cooking for myself for over 40 years, Mom’s food is still the best). For another thing, the bagel was a little hard. Still, I covered the result with strawberry jam and it wasn’t half bad. Plus, it was mine. I decided to give it a name. I called my creation Bagelegg. Yeah, I know. Not that original. Not that enticing. But, as the Immortal Bard once wrote, what’s in a name?


I started naming my adlibbed culinary works when I got my first apartment after graduating from the University of Georgia many years ago. Armed with a near-useless degree in English Literature and a severe lack of ambition, I got a job as a bus boy at the Wrangler Steak House, just off campus in Athens. Times were hard. The $1.35-an-hour-plus-tips wage (the tips brought it up to about $1.36/hour) barely covered my primary expenses, rent and drugs, but I could eat one meal a day at the restaurant, and I could take home any scraps I scraped off the plates I cleaned.


Gross is the comment I usually get from folks when I share this story, but I promise you, I cleaned the meat and potato scraps I took home, and I cooked them thoroughly. I came up with two main ways of preparing the results for consumption. Sometimes I’d boil all the scraps along with a few steak bones in a big pot with sauces and spices (ketchup and salt) to make Meat Soup. Other times I’d throw the scraps in a big skillet, along with canned veggies and whatever leftovers were in the fridge, and sprinkle cheese over the top for Glop.


Glop and Meat Soup. I liked my names, but I don’t think they were too appealing to others. A typical conversation with the rare visitor went something like…


Hey, that smells good. What are you cooking?
Glop. Want some?
Uh, no thanks.
You sure?
<silence>


Hey, that smells good. What are you cooking?
Meat soup. Want some?
Uh, no thanks.
You sure?
<silence>
So, what’s in a name? Apparently, quite a bit. The stuff smelled good. The dog never turned it down. But, in all the time I lived in Athens, no matter how much pot was smoked beforehand, I never persuaded one human being to try either concoction.
Wow, man, I’ve really got the munchies.
Want some Meat Soup?
Uh, no thanks.
You sure?
Uh, I gotta go, man. Later.
Sigh. I’m afraid a less-than-compelling name can steer some folks away from an otherwise tasty treat. Fine. If y’all don’t want to eat my Glop, I’ll eat it all myself. So, there.
But I’m afraid the same principle applies to books, and I’ve slowly become aware that my talent for coming up with lame names may be affecting sales of my novel. The overwhelming majority of folks who’ve read The Draculata Nest have liked it. It has an average reader rating on both Amazon and Goodreads hovering around 4.4-out-of-5 stars. Folks who’ve read the soon-to-be-released Dragon of Doughton Park have been wildly enthusiastic.
But, if you read all the reviews you’ll see a recurring theme where folks have had to overcome reservations about both the cover and title of the book before becoming pleasantly surprised at the content within.
My know-it-all-friend David warned me about the title of The Draculata Nest when he read the first draft and suggested I come up with something better. I ignored him and stuck to my guns. I’m an artist, after all. But, you can’t argue with the readers. Critics? Sure. Editors? Maybe. Not readers. Readers are the ultimate test of the value of any book. I’d be insane to ignore reader feedback.
But, what am I supposed to do? Perhaps I should follow convention and name the two books something like Forbidden Lust and Passion’s Release. The covers would have shirtless male hunks with washboard abs and scantily clad women regarding the reader with sultry expressions. Sorry, I can’t do that. I have some integrity left. (Actually, I wouldn’t be adverse to the scantily clad women, but if I veto the one I should be consistent, I suppose.)
Well, I’m doing something about the cover. I’m blessed to have the artist, Ray DeLotell, to have done the cover art for both a re-release of DN and the upcoming Dragon. He’s also come up with some great conceptual ideas for the cover of the third book of the series.
We might be stuck with the titles, though. The Draculata Nest is copyrighted and already has a year’s worth of reviews and such under the name. I’m not sure what problems it might cause to change it at this point. And, like I said, I’m not really good at coming up with compelling names.
Maybe you guys could come up with some suggestions. Yeah, that’s it. Those of you who’ve read DN or Dragon (all except David, who’s already suggested some totally inappropriate titles), if you were naming the books, what would you call them? Leave a comment.
And remember:
From now until the time Dragon goes on sale, the ebook price for The Draculata Nest has been reduced to only $0.99. You can purchase DN through one of the following venues…
DNest for kindle     DNest for nook     DNest in paperback     in Charlotte