Hello, folks. I must apologize again to the small core of loyal followers of my blog for the lateness of this post. As I have mentioned before, I have been nursing along a sick laptop for months now, and it has been harder and harder to keep it running long enough to do much writing or blogging.  In the next few days I’ll be facing that tough decision, should I pull the plug? More will be revealed.


I am still waiting for the cover design for the re-release of The Draculata Nest and the cover art for The Dragon of Doughton Park. The text for Dragon is ready. All that remains is to format it for the various release venues, work up the acknowledgments page and submit it for copywriting. I can’t do much more until I get the artwork. Yes, I am frustrated and impatient, but I know it will be worth the wait.
So this week I want to share with you a milestone of sorts. As you may remember from a few past posts, I have a son who entered my life well into my middle age and has been a constant source of amazement for over thirteen years. Several days ago he did something that he dubbed, and I quote, “one of the greatest intellectual accomplishments of my life.”
He beat me at a game of chess.
Okay, he does have a flair for the dramatic. I can think of several other of his intellectual accomplishments that would get my vote for his greatest. (He taught himself to read, for one.) And, although I can usually hold my own against most run-of-the mill players, I am no chess master. But I have been mercilessly drubbing him in the ultimate board game for many years. Yet, Wednesday evening, September 5, 2012, at approximately 7:45 pm, Eastern Daylight Time, he maneuvered my king into a position of check and mate.
He did it with an opening move, which I shall henceforth refer to as The Green Gambit, so outrageous and seemingly pointless that I was drawn irresistibly to try and counter it when I should have just ignored it and stuck to my usual strategy of trying to control the middle of the board. In no time I had set up a line of my pawns that effectively restricted nearly every offensive movement from my side of the board. I saw early in the game that I was beaten and I offered to resign.
He wouldn’t let me.
No, even though he saw I was beaten, he refused to allow me to retain one iota of dignity. He insisted I play until every one of my pieces had been cut down and stacked on his side of the board and I had no more moves to make. Then, he took the following picture and posted it on Facebook, accompanied by all sorts of trash talk. 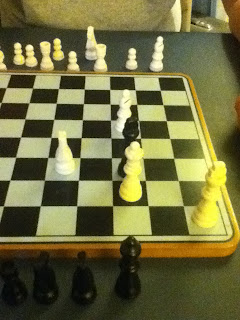 But despite his efforts to humiliate me, I had the last laugh. You see, I have something that he won’t understand until he’s walked in my shoes years down the road, a father’s pride. It was the most fun I’ve ever had losing. Way to go, Seth! I look forward to many, many more challenging adventures of all kinds with you, son.
Well, that's all for this week's blog. I hope to have some cover art and publication dates to share with you next week. Until then... Happy Reading!