Buddy, can you spare a cigarette?


Hey, folks. I wrote half a blog Friday night, which I intended to polish off Saturday evening for a Sunday morning post, but it’ll have to wait until next week. Something else came up, an encounter of sorts, that I feel compelled to share with you.


Saturday was one of those perfect late summer days in Charlotte - sunshine, billowy white clouds, temperature in the low eighties. It was the perfect day for a long bike ride. I had no major obligations, so I took the day off from writing, laundry, grocery shopping and paying bills and took off. 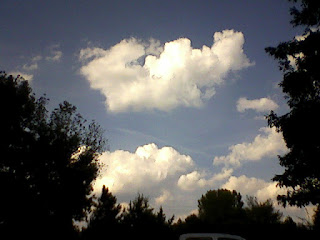 It was wonderful. I took the back roads through quiet neighborhoods and made my way over to the McMullen Creek/Four Mile Creek Greenway. I cycled a little over 30 miles, taking it easy and enjoying the day. As the afternoon was waning, I cycled out of the Four Mile Creek Greenway, heading home, when I saw a young man approaching, himself on a bike. He pedaled to a stop and flagged me down.
Ah, I thought, a fellow cyclist in need of help. He probably needs directions. And since I live to serve, and the day had gone so well, I gladly skidded to a stop next to him and asked if I could be of assistance.

“You wouldn’t happen to have a cigarette, would you?” he asked.
“What!” I exclaimed, incredulous. “No, I don’t have a cigarette! Are you crazy?”
He back pedaled uncertainly at the vehemence of my reply, averted his eyes, and started to go on his way.


Now, some of my friends who might be reading this know my history and how militantly anti-tobacco I am. Or was, anyway. I mean, guys, haven’t I mellowed a bit over the years? Haven’t I become less judgmental and more tolerant as I’ve grown older? Well, no. Apparently I’ve just been suppressing all that, because my old self came rushing out as if a dam had burst.


A part of me felt the lecture about to begin but was powerless to stop it. As soon as he could get a word in, he mumbled something like, “Yeah, I should probably quit,” and tried to go around, but I blocked his path. I watched his eyes glaze over as I began to rail about how nicotine is the world’s most addictive poison, blah-blah-blah, then watched the glaze turn to fear as he began to wonder if this crazy old man might actually be dangerous.


I saw his fear and came to my senses. I tried to tone it down a bit. After all, to him it must have seemed an innocent enough question. I apologized for my over-reaction, and should have gone on my way. Instead, I proceeded to try and explain myself. I told him of the friends I’d lost to cancer and emphysema. He tried to politely extricate himself from the one-sided conversation.
That was when I started spouting statistics.

I should never do that. Like Paul Ryan’s marathon time, my statistics tend to get a little exaggerated in the heat of passion. I told him how most people who start smoking before they’re twenty-one are never able to quit and that most who do quit try unsuccessfully to do so an average of nine-to-ten times. (The principle behind that is true. I’ve known recovering heroin addicts who can attest to the fact that nicotine is much harder to kick, but are my numbers correct? Probably not.) I told him that one of the reasons I can’t afford health insurance is due to the trillions of dollars spent each year for treatment of those suffering from tobacco-related illnesses. (It’s a lot, but is it trillions? I’m not sure.)


Finally, the young man was able to work his bike around me and pedal away, nodding solemnly. As I watched him recede down the greenway path, I considered whether my lecture had hit home. I’d obviously shaken him up, and after all you never know when something you’ve said or done can make a difference. My speech, though harsh, may have done some good. I began to feel a little better about the whole encounter.


But then I saw him slow down and stop beside a young couple strolling hand-in-hand. I saw the man nod his head and reach into his pocket. He pulled out a pack of cigarettes. Not only did he give one to the cyclist, he took one himself, and proceeded to light both of them.
I stood and watched for a moment, dumbfounded, as they chatted and smoked.


Oh, well.
Hey, guys, I promise, promise, promise that The Dragon of Doughton Park will be released soon. I'm still waiting for the covers to be done. It'll happen, I just know it. Meanwhile, copies of the first book of the series can be purchased in the following venues...
ebook for Kindle    ebook for Nook    Paperback copies    in Charlotte
Until next time... Happy Reading!