June 23, 2012
First of all, I want to announce that, in preparation for the release of its sequel, The Draculata Nest ebook for Kindle is available this Saturday and Sunday (June 23,24) for FREE DOWNLOAD. Click on the link to get your free copy. You can have it read and be ready to buy The Dragon of Doughton Park when it comes out in a few weeks. The Draculata Nest
So, besides waiting for my editing team and cover artists to complete their assignments for Dragon, what have I been doing? Stephen King suggests an author take some time off from writing/editing his work after sending out the draft to readers, and I’m trying to take his advice to heart. While my editing team pours over the first draft of The Dragon of Doughton Park, I am doing my best to refrain from touching it in any way until all the feedback is in. I’m being assisted in that effort by my laptop, which has suddenly begun overheating and shutting down. My know-it-all-friend David (told you he really does know a lot) is helping me track down the problem. So, what to do if I can’t write?
READ! 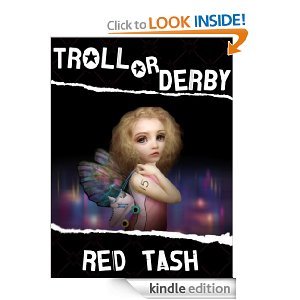 Yep, I’ve been reading like a fiend all week, and I ran across a real gem that I want to share with you. I found Troll or Derby by Red Tash from a blurb in a Facebook group. The title intrigued me, so I clicked the link. After admiring the cover and the product description, I posted a comment on FB that I liked the title. The author replied back that the sequels would be Troll or Park and Troll or Trash. I was hooked. I clicked back to amazon.com and downloaded the kindle version immediately. It’s the best $2.99 I’ve spent in a long time.
Troll or Derby is Paranormal Americana at its best. It starts out at a dead run as teenaged Roller Deb rescues her older sister from a meth lab fire and the pace only increases from there. Ms. Tash is a former journalist, and it shows. There is not a wasted word in the whole story. There’s no time for background explanations or character development. You need to keep your head up and your eyes and ears open and get ready to duck ‘cause the next thing’s coming at you already. Yet somehow, amidst all the chaos, I came to know the characters and their world pretty well by the end of the book and am eagerly awaiting the sequel.
That’s really all I’m going to say about both characters and plot. This is an action book and to describe any more of it would risk spoiling something for the reader. But aside from the pace there were two particular things I liked about the book that bear mentioning. The first is the author’s talent for saying much in few words. Here’s an example, where Deb sums up her relationship with the evil April, “My heart both longed for her and ached for its own stupidity, at the same time.” Man, it would have taken me half a chapter to say that!
The other thing I liked about the book was the very natural, off-hand treatment of Deb’s sexual orientation. It’s an important element of the story, but at no point does it become the central theme. This is the way it should be, and in my opinion does more for gay rights than any amount of preaching from the soap box, which I’ve done more of in the last sentence than Tash does in the whole book.


I was a little disappointed there wasn’t more roller derby action, something I was expecting from the title, but that was not enough to keep me from giving Troll or Derby five stars. Dollar-for-word, this is the best thing I’ve read all year. If you’re interested, click the link.  Troll or Derby